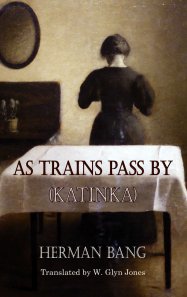 As Trains Pass By ( Katinka)

As a literary stylist Bang was decades ahead of his time. Influenced by the then emerging realism in Germany, his objectivity was also highly subjective in that his fiction is about outsiders. He never judges, he seldom interjects; his narratives are driven by dialogue. Few writers evoke the painterly chaos of apparently inconsequential social scenes as easily. Within sentences of this novel’s opening, at the railway station, he has established a sense of the small community, including the local mother most in need of marrying off her spoilt and bickering daughters. His all-too-human characters are brilliantly three-dimensional, and the dialogue is lively and convincing. In contrast to the bustle at the station is the inertia of Katinka’s life. Increasingly, she simply wants to tend her flowers and to sleep.
Into this tiny community of old maids, frantic widows and unhappy wives comes the new bailiff, Huus, a quiet man with his own secrets. He and Katinka begin an innocent friendship that intensifies while Bai merrily thrashes his path through life. It is exquisite. Each kind word and shared interest is treasured by Katinka.
The simplicity and intensity of the story are mirrored in this translation by W Glyn Jones. Katinka’s catastrophe is far more powerful than either that of Emma Bovary or that of Anna Karenina in a novel that is about far more than her wilful misfortune. Bang’s gentle heroine dominates her story, although, as he cleverly suggests in the understated denouement, life can, and does, carry on.

In this 19th-century novel set in rural Denmark, Katinka Bai, a young woman married to a coarse man, thinks herself content until she meets Huus, a newcomer to her town. As she gradually falls in love with him, she keenly feels both the aridity of her marriage and the promise of fulfillment with Huus. When Katinka resists temptation and breaks off contact with her suitor, the consequences of virtue prove as tragic for her as those of sin did for Emma Bovary. Remaining in a soul-destroying union, powerless against overwhelming internal and external pressures to conform, Katinka falls ill. Finally, a revelation about her husband inspires her to fight to save herself, but it is too late. Told with intelligence and compassion, this is a strongly feminist novel about the destructive limits society imposes upon women as well as a portrait of mankind's poignant search for love. Impressionistic dialogue effectively conveys a sense of characters and events, and fresh, quickly drawn descriptions of the Danish countryside provide a welcome counterpoint to the stifling human drama. Honed insights and spare, direct style give this classic very contemporary appeal.

Bang's affiliation with Scandinavia's Modern Breakthrough and its nesr-ideological belief in realism is shown here in his unflichinging attention to the pains of life: Katinka's illness (consumption)is drawn with sharp but moving exactitude. Bang's homosexuality brought him great difficulties and surely heightened his ability to give significance to trapped lives. W. Glyn Jones - who died last year shortly after completing this translation - has rendered Bang's sensitive prose with memorable limpidity.