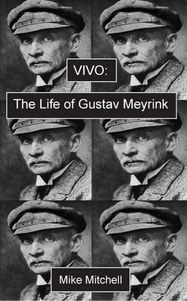 Mike Jay in The Fortean Times

Mitchell a prolific literary translator, looks at the enigmatic Gustav Meyrink (whose novels he's translated) in this vibrant biographical debut. Meyrink, a Prague native, was prominent in the late 1800s through the early 1900s, oddly enough, as a banker, mystic and satirist (best known for The Golem). Mitchell scrutinizes the man's odd life and infatuations, especially with the occult, which seems to be at the center of his first marriage's failure. Meyrink is revealed as an eccentric and sensitive individual, taking much of the material for his satire from his own troubling experience with the law, the military and the petit bourgeoisie. In this thorough biography, no angle of Meyrinks' life is left unexamined: his drug use, multiple marriages, and stint in prison (wrongly incarcerated) are discussed in depth. Mitchell's biography is fascinating and extensive, but at times speculative; Mitchell confesses up front to “a dearth of documentary evidence” and a comparative “wealth of anecdote... much of it published after his death, and much of it recounting fantastic events.” Still, Mitchell excels at his concise organization and his ability to effectively portray Meyrink through both facts (“as far as they are ascertainable”) and “as he appeared to his contemporaries, especially the younger [ones].” This examination of a dark, begrudging and sensational individual makes a for a supremely entertaining biography.

Mike Mitchell the masterful translator of Meyrink's major novels into English, has written the first major biography for English speaking readers. For too long Meyrink has suffered an undeserved obscurity due to his writings generally not being marketed to American readers and the inability by publishers to understand how to market this literary enigma. This biography should serve to introduce Meyrink to a much wider and more appreciative audience.

Meyrink is no easy subject for a biography, and Mitchell is to be lauded for tracking down the facts in a life strewn with intentional mythologizing by its subject. Meyrink was personally obscure, prickly, a bon vivant, ascetic, sportsman, occultist, satirist and a writer of remarkable skill in invoking the grotesque and an atmosphere of menace. Meyrink was born illegitimate in a time and place where social standing was everything, and the slights suffered by him in Prague and Vienna haunted him to the end of his life.

His satire rivals that of Karl Krause, targeting most often military, the aristocracy, and government officials. His supernaturalism, dark cynicism and self deprecation remind me of Ambrose Bierce's writings. Yet woven in his works are a deep understanding of Buddhist and Taoist metaphysics. A practitioner of yoga his entire life, he lived and worked in the shadow of the seen and unseen, the real and the unreal.

Best known for his 1914 novel "The Golem", though rich in the atmosphere of the old Jewish ghetto of Prague; I personally find his short stories and other novels of greater interest with better structured plot lines and depths of implication.

The conclusion of this biography has a brief touching memoir by Meyrink's wife of his final days. One comes away with the knowledge that in life, work, and his death he was a Mensch in every sense of the word. Highly recommended.

Mike Mitchell is one of the best translators of German literature, in particular he has translated a lot of German literature of the
fantastic… His biography of Gustav Meyrink is the first in English… the main merit of the book is his considered, impartial approach and the common sense with which he deals with the extant data, which is often sparse and contradictory… Mike Mitchell's book is an uncommonly readable, balanced assessment which should do much to spread understanding of Meyrink's contradictory character and his books.