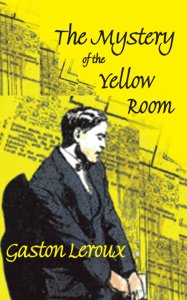 The Mystery of the Yellow Room

My favourite of all locked-room novels has at last been reissued. The Mystery of the Yellow Room was written in 1908 by Gaston Leroux, better known for The Phantom of the Opera, and has never been bettered. The first in a series of novels to feature the intrepid if naive young reporter and sleuth, Rouletabille, it pits him against the dark soul of the detective Frederick Larsan and the murky secrets of the Stangerson family. Considering when the book was written, it remains remarkably modern, a page-turner whose exploration of the dark side can still send shivers up your back. Naturally, the solution to the central crime is a twist within a tortuous twist for which even a Mensa reader will be quite unprepared. A masterpiece.

Maxim Jakubowski in Time Out

Leroux's biggest hit in his lifetime was this ingenious 1908 detective story. The victim is the daughter of a scientist working on the dissociation of matter, she's left for dead in a room locked from the inside, and a Holmesian investigative journalist named Rouletabille steps in to find the rational solution. Leroux's style is appropriately sensational, his plot convoluted and for the aficionados of the genre it makes an enjoyable intricate puzzle.

Rouletabille outwits Larsen in an ingenious resolution which has the occupants of the courtroom gasping in admiration.

Faced with the impossible crime,even the hardest-headed detectives begin to canvass implausible criminals.Weird science and supernatural agencies are adduced, conjuring up a powerful atmosphere of the same kind of unholy wonder one feels in the early films of Frankenstein. Yet The Mystery of the Yellow Room is a strictly fair-play, by the book murder conundrum, brilliant but logical and down-to-earth that explains the layout of the scene of the crime.It is what Leroux does with this honourable but limited format that makes it so rich and strange.Taking advantage of the mechanical artificiality and unreality of this fictive world where violent death evinces no stronger emotion than curiosity and makes hardly a ripple in the pool of everyday life, he makes the normal realistic narrative background as bizarre as the plot it frames.This is what we're not used to, and what 90 years makes this as compelling and crazy a nightmare as the Surrealists ever dreamed.

Kenneth Wright in The Herald

I'd offer a reward of £500 if you can guess the solution to this crime.

Desmond Christy in The Guardian

The book boasts two of my favourites in reading:a huge epiphanal twist at the end of the book and the mature, thoughtful and challenging style of a classic French author. The book and all of the furore surrounding the great mystery alone are an immediate hook to the curious reader. Described as a perfect mystery - this locked-room novel presents classic characters straight from Parisian society at the turn of the 19th century: the dark and turbulent detective Larsan juxtaposed with the young and intrepid hero - reporter and sleuth Joseph Rouletabille. You are truly blindfolded through the book, grasping onto any thread that may reveal the murderer's identity or indeed his point of entry into the seemingly sealed Yellow Room in Prof. Strangerson's pavilion.
Read it, and go 'Aaaahhhh?!' at the end because there's no way you'll guess who done it.

Perhaps better known for The Phantom of the Opera, author Gaston Leroux also wrote this archetypal but highly effective and original detective novel in 1908 as the beginning of a series of novels featuring the serial protagonist and sleuth, Rouletabille. This incorporated so many of the ingredients that are common today to the police thriller:the intrepid young reporter,the grizzled old investigator and the classic twist at the denouement. Very modern in its analytical approach and surrealist nightmare composition, it is gripping and bizarre in equal measure and perfect genre introduction.

Sophisticated and ingenious, The Mystery of the Yellow Room is an excellent addition to Dedalus' delightful series of European classics.

...this lovingly crafted retro republishing of the first of his series of Edwardian murder mystery novels reveals the Kafkaesque surrealism behind the classic author mask. The French writer sets up an apparently murder-by-numbers plot, teaming up a precocious reporter and a brooding detective in a search to untangle the dangerous secrets of the Stangerson family,but finding out just what happened is far from simple.Be warned:Leroux's debut crime fiction is still considered to be one of the most impossible-to-deduce fictional mysteries ever created. Devilishly puzzling but definitely satisfying.
****

Gaston Leroux's The Mystery of the Yellow Room is definitely a book to savour. This is a murder conundrum, which pits young reporter and sleuth Rouletabille against Detective Larsan and the Stangerson family. Now considered a masterpiece, this is the original book in which the phrase'twists and turns a-plenty'was coined.

Ian Maxen in Whats on in London

Fans of Tintin will be delighted by Joseph Rouletabille, a reporter and amateur detective who first appeared in print in France in 1908. Rouletabille is a charismatic young fellow with a head that resembles a tomato both in shape and hue, plus a genius for solving crime through the application of pure logic. The puzzle he faces in this, the first of seven outings, is the epitome of the locked room mystery: a woman has been brutally attacked within a barred chamber that contains no perpetrator, only a bloody handprint and the mark of giant boots on the floor. In the most famous of locked room tales, Poe’s The Murders in the Rue Morgue, the murderer was a monkey. Here the solution is even more fiendishly complicated, requiring much brow-furrowing on the part of the young Rouletabille. Gaston Leroux is better known as the author of The Phantom of the Opera, but this rattling tale stands as a testament to his years as a court reporter. The denouement is hardly likely, but Rouletabille's process of deduction is a delight, as is his bombastic dismissal of any dissenting points of view.

Olivia Lang in The Guardian

It does, however, deliver the mystery with outstanding class and finesse.100 years on there’s not a chance you’ll guess the crime solution.

The daughter of a famous scientist is found half-dead at a remote chateau. Her attacker has vanished. But how did he flee the locked room where the crime took place? Enter Joseph Rouletabille, Parisian journalist and wunderkind.

This may seem the hoariest of plots for a crime story. Yet the most arresting aspect of Gaston Leroux's 1908 The Mystery of the Yellow Room is how modern in sensibility it is. Unafraid to draw attention to its own artifice, it self-consciously winks at the reader. Rouletabille rails at detectives who have learnt from Arthur Conan Doyle and Edgar Allan Poe. Meanwhile, the chateau is haunted by the unearthly cries of the Good Lord's Cat, a giant feline to terrify any Baskerville hound.

If Leroux's book has fun with its literary forebears, it also offers a template for later writers. He shares with Poirot a self-confidence verging on arrogance and a tendency to talk about himself in the third person.

Adrian Turpin in The Financial Times

Leroux is more famous for writing The Phantom Of The Opera, but this excellent reissue of his "locked room" mystery shows his ingenuity and surrealism far better. One critic even offered £500 if you could guess the solution.

Miss Stangerson is found severely injured, attacked in a locked room at the Chateau du Glandier. Leroux provides maps and floor plans showing that a presumptive murderer could not possibly have entered or escaped. Amateur sleuth Joseph Rouletabille has to figure out how the attack was done. Another early classic

one of the benchmark novels of impossible crime fiction.

It is often said of the rediscovery of supposed literary treasures that it would have been better if they had remained undiscovered. The Mystery Of The Yellow Room is a notable exception. Riding the popularity of the Baker Street sleuth, Gaston Leroux, who is best known for Phantom Of The Opera, set out to create a hero with the deductive brilliance of the great detective but, in all other respects, as little like him as possible.
Barely out of his teens, Joseph Rouletabille is already a famous investigative journalist when he takes on the challenge of discovering the how and why of the attempted murder of an eminent scientist. In this early version of the locked room enigma, Leroux makes no concession to easy or trick solutions.
The villain remains elusive until a climactic courtroom drama when, with melodramatic flourish, Rouletabille reveals all.
It only needs Sherlock Holmes to be on hand to lead the congratulations.

The Mystery of the Yellow Room by Gaston Leroux- but the door was locked. This gripping 1907 locked-room mystery is one of the defining novels in the genre…
Agatha Christie and her famous detective Hercule Poirot were self-confessed locked-room mystery fans. In the 1963 Christie novel The Clocks, Poirot is writing a book about detective fiction. In it he discusses a classic of the sub-genre, The Mystery of the Yellow Room by Gaston Leroux: “ ‘And here is The Mystery of the Yellow Room. That — that really is a classic! I approve of it from start to finish. Such a logical approach!…All through there is truth, concealed with a careful and cunning use of words…Everything should be clear at that supreme moment when the men meet at the angle of three corridors.’ He laid it down reverently. ‘Definitely a masterpiece…’ ”
Leroux is better known for his novel The Phantom of the Opera, which adapted by Andrew Lloyd Webber has become a world-famous musical. This is a shame because The Mystery of the Yellow Room is a classic of detective fiction, and a superior book. It was first published in France in 1907, and in a well-known poll by Edward Hoch in 1981, it was voted the third best locked-room mystery of all time, after Carr’s The Hollow Man and Hake Talbot’s Rim of the Pit.
The plot centres on the attempted murder of Mathilde Stangerson, the daughter of a scientist who is working on a theory of “the dissociation of matter”. Mathilde is found close to death in a locked room next to her father’s laboratory, and there seems to be no plausible way for her aspiring killer to have escaped from the room after attacking her. Please don’t worry, as I did, that the “dissociation of matter” element of the story is paving the way for an answer along the lines of “the killer dissolved into many particles and escaped via ordinary movements of air”.

Sophie Hannah in The Times