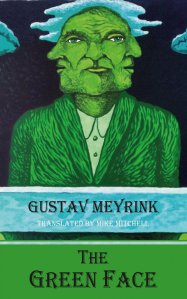 Of the volumes available to the English public, The Green Face, first published in 1916, is the most enjoyable. In an Amsterdam that very much resembles the Prague of The Golem, a stranger, Hauberisser, enters by chance a magician's shop. The name on the shop, he believes, is Chidher Green; inside, among several strange customers, he hears an old man, who says his name is Green, explain that, like the Wandering Jew, he has been on earth 'ever since the moon has been circling the heaven.' When Hauberisser catches sight of the old man's face, it makes him sick with horror. The face haunts him. The rest of the novel chronicles Hauberisser's quest for the elusive and horrible old man.

Alberto Manguel in The Observer

This translation of The Green Face evokes a brooding, pre-first world war Amsterdam of ghettos, refugees and religious cults. The novel can be be read on many levels, something which no doubt contributed to its longevity.

Eric Hidrew in The Leeds Guide

Gustav Meyrink's most mystical novel yet. First published in 1916 to critical and commercial acclaim, the book is set in the near future of post-war Amsterdam, and is an elating vision of apocalypse. A trait of Meyrink's novels, particularly The Green Face, is its depth of meanings, which go beyond one single interpretation. It deals with love, a galaxy of grotesque characters, but it has other hidden significances, like the mystic conception of life. Full of symbols and parables, it's a very complex novel that is difficult to understand, but certainly worth the trouble.

This is a book rich in ideas, its text dense with occult imagery and thought, fascinating theories about the nature and purpose of our lives, and I think it would take me several readings to unravel all its sense. There is excellent characterisation, Meyrink demonstrating a keen eye for human foibles and appreciation of the lengths to which men can be driven in desperate times, and a subversive streak of humour as counterpoint to the general air of seriousness, with Hauberrisser and his friend Baron Pfeill happy to puncture the pretensions of those around them. Meyrink also excels in creating a vivid sense of place, Holland in the days before WWI, with its diverse populace living in the shadow of disaster to come, which casts a fin de siècle feel over the whole work, while the various mystical groups, with their respective manias, are all beautifully realised.