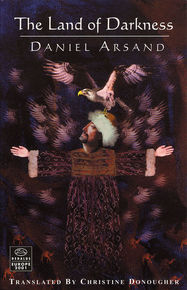 This classic won the Prix Femina Best First Novel in 1998. Superbly translated by Christine Donougher, it is set in 1289 and tells of an extreme journey to the east, filled with personal quests for glory, love, power and domination. A look at the dark side of human nature.

Debby McGregor in Scotland on Sunday

The Land of Darkness is not merely an account of a journey to the East. Rather it is an exploration of the darker side of human nature. Each of the main characters represent an aspect of contemporary civilisation: the merchant (Montefoschi), the Friar (Vartan), the thief (Hovsep) and the leader (Jebe). The characters, initially united by their shared eagerness to reach Peking, are brought into conflict by their individual self-seeking desires. In the claustrophobic atmosphere of the caravan, this conflict gives rise to greed, jealousy, lust, fear and hatred, expressed in their most raw forms. Arsand presents us with an array of tormented and unsavoury characters, as intriguing as they are repulsive. The Land of Darkness is a dark, disturbing and moving tale of how man's humanity can be so easily consumed by his baser passions.