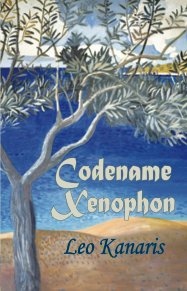 Leo Kanaris takes us to post-crash Athens as austerity bites and political corruption spirals…. Codename Xenophon is compelling and evocative (the sparkling sea and sun)... Kanaris has written a little gem, perfect for the beach.

A professor of ancient history, who dares to bring up the horrors of ancient Greek history, is the first in a series of murder victims that brings private investigator George Zafiris into conflict, over and over again, with the nation's failing institutions, against the backdrop of its crisis. The investigator’s methods are old-fashioned, the cheating wives and husbands consistent, and the language classic mild: ‘Tell him to go boil his arse.’ But for all the book’s semblance of outdatedness, the author’s eye is quietly sharp. Of a middle-aged man bedecked with gold, trophy girl and powerboat: ‘The market had crashed two years ago, but luxury—of this strange, 1960s, cigarette advertisement kind—still flourished.’

Anyone picking up this book needs to be cautioned at the outset: it will eat considerably into your time for other things and be extraordinarily difficult to lay aside. In Codename Xenophon Leo Kanaris has woven a tight and quirky tale of murder, high-level intrigue and corruption in the timely setting of modern Athens and its island satellite, Aigina.

john Carr in The Anglo-Hellenic Review

Set in Athens in 2010, Kanaris’s impressive debut, the first in a projected quartet, effectively evokes Greece’s noble antiquity while portraying its current financial crisis, which his hero, PI George Zafiris, attributes to former prime minister Papandreou, who created the “most bloated, obstructive bureaucracy on the planet.” Zafiris, scraping by from case to case, aching from the infidelity of a wife he still loves, and at every step hamstrung by corrupt and arrogant police, investigates the shooting of a Greek scholar and confronts a Gordian knot of governmental corruption, adulterous relationships, and vicious criminals. Struggling to preserve his self-respect, Zafiris prevails—almost. Disgusted by those whose respect for Greece’s past leads them to avoid present-day responsibilities, Zafiris worries constantly over his country and its future, but he survives through fitful glimpses of the spirit that gave birth to Western civilization, still strong after 2,500 years.

Blessed with all the virtues of a traditional murder mystery, this debut novel has a sharp political edge.
Three years in Athens left Leo Kanaris with a loathing for the self-serving parasites and bureaucrats who ‘had paralysed the country for decades’.
In Codename Xenophon, this insider’s view of a paralytic society is seen through the eyes of George Zafiris, a private investigator who does his best to tread the straight and narrow, while those around him are too greedy or plain scared to take responsibility.
It is the apparently motiveless killing of an elderly academic that embroils Zafiris in political machinations at the highest level. But, as his dogged perseverance begins to pay off, he comes to realise that even the best intentions can have tragic consequences.
With vivid characterisation and a plot that thickens without obscuring the essential threads, Kanaris emerges as a sharp new talent in crime writing.

Opening in Athens in 2010, Leo Kanaris’s debut novel Codename Xenophon introduces private detective George Zafiris, who is commissioned to investigate the murder of John Petrakis on the island of Aegina. The suspects are as plentiful as the red herrings, not least because Petrakis was an eminent scholar with a penchant for exploring the taboo aspects of classical Greece, but in keeping with the private eye tradition, Kanaris and his creation are as interested in investigating their time and place as they are in pursuing justice. “The laws were ever more elaborate in their complexity, the people ever more ingenious in their evasions. Each tormented the other,” Zafiris tell us as he seeks to throw light into the shadow of crippling austerity that looms large over the story. The narrative flits from a frenzied Athens to the idyllic islands as politicians, Russian crooks, corrupt (and/or incompetent) policemen thicken the plot, the world-weary Zafiris nimbly negotiating a Byzantine culture in which morality, truth and justice are malleable concepts. The first in a proposed quartet to feature George Zafiris, Codename Xenophon is a bleak but blackly comic tale that does full justice to its laconic, Chandleresque heritage.'

Declan Burke in The Irish Times

George Zafiris, a private investigator in Athens Greece, is asked to solve the murder of a well-known professor of ancient Greece. Later murders of a politician and a journalist add to the mix, but how, or if, they connect is not obvious. The biggest obstacles for Zafiris in his investigation are the wide-ranged bureaucratic corruption and subsequent financial crippling of the country. He attributes his challenges to the “taking it easy as a national disease”. After much stonewalling a colleague advises him to combine his logical mind with intuitive thinking. George blends these two approaches, drawing a diagram which provides a guide to connecting the dots. The solution is creative and the story is replete with descriptions of a society once honored for its contribution to civilization on a steady descent. This debut novel is interesting, educational, thoughtful and well worth the time to read. I look forward to more investigations with George Zafiris.

If you fancy a light read that gets under the skin of the Greek nation in its modern and ancient manifestations, you wouldn’t go far wrong with Codename Xenophon.