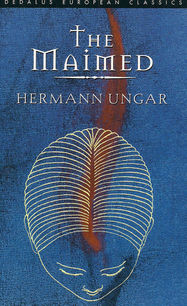 A sexual hell, full of filth, crime and the deepest melancholy - a monomanical digression, if you will, but nevertheless the digression of an inwardly pure artistry.. a masterpiece that would be honoured in any classic oeuvre.

What is with these Czechs? It is not just Kafka:they all seem to be obsessed with the idea of forces acting against them, forces of motiveless malevolence. Franz Polzer is that quintessentially 1920s creation, the tormented bank clerk. His outer life is pristine, his inner one deeply unhygienic:fears of disorder plague him and when his landlady, Frau Polger, begins to make unmistakably sexual advances to him, his mind buckles into a state of helpless paranoia.Nor is that all:his best friend,Karl Fanta, is dying slowly of a hideous wasting disease which unsettles his reason.Everyone is drowning in a desperate search for security.The destinies of Franz, his landlady, Karl and a mysterious male nurse converge in a denouement of madness and murder.
Somewhere Polzer knows that whatever it is, it's not his fault, but he can never find the words:the text seems to hint that a sense of guilt is preferable to bewilderment.Polzer himself is a profoundly poignant figure: one of the novel's most moving moments has Frau Polger throw out the picture of St Francis which Polzer had always treasured:'It's just that he was always on the wall above my bed'.

This sobering account of one man's descent from irrational paranoia to self destruction is at once repulsive and captivating, and well worth a read if you can handle it.

Polzer's life is entirely stifling and governed by fear.The grim matter-of-fact style entrenches the irony as his life cascades into the abysss.

Martin Tierney in The Glasgow Herald

First English translation of a bleak 1928 novel by a forgotten Czech member of the generation of Doblin, Brecht and Werfel. It's a closely concentrated analysis of the frail psyche of obscure bank clerk Franz Polzer, a timid paranoid whose obsessive pursuit of order and control lead ironically to helpless explosions of irrationality and violence, and to his eventual undoing. Ungar's understated prose (perfectly captured by veteran translator Mitchell ) trains a cold clinical eye on the processes through which Polzer - in effect, a country mouse adrift in a wicked city-is seduced by his promiscuous landlady and misled by his satanic 'best friend,' a moribund, wheelchair-bound misanthrope, thus set on a path toward self-destruction. Unusual and unsettling: what a film it would make.

It is a mystery why Hermann Ungar's remarkable novel The Maimed has taken seventy years to finds an English translation.A French version was published in 1928, five years after the German original, and Ungar's works were admired by many, including Thomas Mann and Stefan Zweig, who described the book as 'Great and terrible, alluring and repulsive - unforgettable, although one would like to forget it and flee the evil sense of oppression it creates.' Ungar, a German-speaking Czech Jew, born in Moravia was often spoken of in the same breath as Kafka.
Despite its grimness, there is also a darkly comic element throughout the book. Ungar's economy of style maintains tension and pace, while the lack of writerly description increases the drama. The writing has a crisp modern edge which the translator Mike Mitchell renders into convincing and natural English.