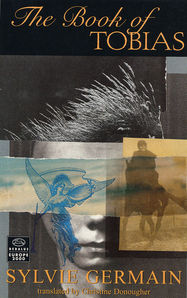 Germain treats the biblical story of Tobias, found in The Book of Tobit, to a modern, masterful retelling, bursting with splendid language.... this magical tale occurs in a world that is both medieval and modern: postwar detritus is strewn about the otherwise bleak and timeless setting, where the absurd and Gothic flow alongside the pragmatic and disarming. Delightfully constructed, powerfully imagined, magnificently worded.

The book of Tobit in the Biblical apocrypha tells how Tobit's son of Tobias went on a journey with the angel Raphael, encountering a woman who brought death to all her suitors. Sylvie Germain recasts the tale in modern France, creating a powerful and visionary novel of family relationships, grief and redemption, which begins when young Tobias's mother is killed in a freak riding accident.

When Deborah sings,'Can someone go up to heaven and ask God if this is the way things should be?', she is voicing the theme upon which the whole novel is a meditation. The young Tobias is asked not so much for fortitude as for flexibility, an acceptance of the improbable. This he does manage, albeit with a certain truculence. It helps him that he recognises in Raphael 'a dual aspect of mystery and straightforwardness', the latter making the former easier to take. That same helpful duality exists in Germain's writing. Whether or not one can believe in her consolatory message, the beauty and economy of her language (and the translation) carries complete conviction.

Ruth Paver in The Independent

This extraordinary passionate and phantasmagoric fiction draws the reader into a landscape shaped by the intense emotions of the characters, where nothing is fixed or certain, where strange and inexplicable events unfold. Germain has created her own visionary brand of French magic realism, where family histories are played against an extraordinary surreal, fabulously twisted background of social and cultural history.. The writing is dense with weighty description, the images are bizarre - beautiful and grotesque.

Sarah Singleton in The Third Alternative

The most recent of Germain's highly charged Gothic antiromances set in the French countryside is a quirky retelling of the biblical apocryphal tale of Tobias. Its principal characters-both hyper-real and ineffably striking-include a guileless wayfarer, his pragmatic guardian angel, and a beautiful young woman who is either an innocent virgin or Death's handmaiden on earth (if, indeed, not both). Germain's atmospheric landscapes are clogged with haunting detail, but her people are so freighted with garish eccentricities and mythic resonances that it's often initially difficult to credit their reality. Once you've entered her hothouse fictional world, however, there's no resisting its gorgeous, impossible density and seductiveness. An acquired taste, her ineffably odd books are nevertheless highly accomplished performances.