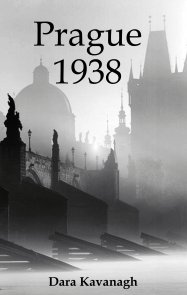 'An amalgam of feelings rose up in me when reading this book, its subject matter – the Czech capital in the brink of falling to the Nazis – difficult to grasp through the eyes of a privileged reader, yet nestled within moments of unexpected joy in all senses of the word. Prague 1938 feels as if stepping into a heightened reality, which one supposes it was.

Centring on a delicately broached romance between young protagonists Guido and Leah, the narrative has echoes of Dickens’ band of thieves in Oliver Twist. The portrayal of 1930s Czech society, and its detailed exploration of Prague, is full of dark realities and upheaval. With upsetting discoveries as well as difficult decisions about where their loyalties lie, Dara Kavanagh’s dialogue gives a profound sense of the fear of incoming war. The novel reminded me of the diaries of Anne Frank, in its honest bildungsroman quality.'

"This is a novel of beauty and darkness and one of the best explorations of the young adult mind in recent contemporary fiction."

'As well as enjoying the clever structure, I was impressed by how well researched this story turned out to be. Every detail of the world of the characters rings true. And while the historical aspects are interesting, what I especially enjoyed is how the novel is full of echoes of 20th century European culture.It is impossible not to think of Kafka while reading the book, given the Prague setting. Kafka lived for a brief time on the same street as Guido, and Kafka’s troubled relationship with his father echoes the father and son duo who are central to this story.Indeed the strange complicity of the Hayek’s relationship reminded me of Bruno Schulz’s The Street of Crocodiles, set in Poland around the same time, because of the equally odd bond between Schulz’s young narrator and his shopkeeper father. Stamp albums are iconic objects in both books, allowing the two young narrators to dream of foreign places far from their own troubled times.Joseph Roth’s The Radetzky March also came to mind, and since I’m speaking of novels with musical titles, I have to mention that I was reminded of Tolstoy’s The Kreutzer Sonata—and let’s not forget that the title of the book has a musical resonance: Mozart’s symphony, known as Prague 38.
There are many direct cultural references in the book, which make it a rich feast.
Some of the chapter titles also have amusing literary echoes, Pequod Mutiny, for example, and Through the Looking-glass and Endgame, which tie in nicely with the chess theme. This all reveals a wonderful playfulness on the part of the author, something I love to find.

'...magnificent Prague 1938, an immersively convincing voice describing a vanished, polyglot world... It is not just its Mitteleuropean setting that made me think I’d stumbled on a recently rediscovered manuscript of Stefan Zweig or Joseph Roth, but the immersively convincing voice of Kavanagh’s prose in describing this vanished, polyglot world. Leah Meisel’s gang of thieves has none of Dickens’s picturesqueness, and as Prague starts to fill with refugees, “…hopelessness, too, has its odour…a mixture of woodsmoke and incontinence and wet cloth and acrid perspiration”.'