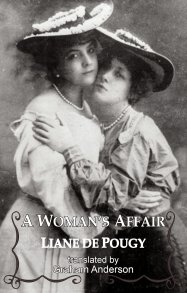 ‘A Woman’s Affair is melodrama at full pelt... Beneath the melodrama is something more interesting: a straightforward acceptance of same-sex love that in 1901 could perhaps only have been expressed in Paris... It is worth noting that (A Woman's Affair) was nearly thirty years before Radclyffe Hall’s much milder allusion (to lesbian love) prompted a British court to brand The Well of Loneliness (1928) obscene...The more thoughtful feminism glimpsed beneath (the frou-frou and silliness in A Woman’s Affair) is illuminating on the choices facing women in the early 1900s, and on the dangers of sex work. Anderson does justice to both registers – silly and serious – in a lively translation that captures Pougy’s effervescence as well as her uneven style.’

Among her most celebrated works were ‘A Woman’s Affair’, which shocked French readers with its depiction of a lesbian love affair. The story was based on her own trysts with Natalie Barney – an American playwright and poet – and details how Annhine de Lys – a bored and restless Parisian courtesan – has her life turned upside down when Flossie, a young American woman, bundles into her life. This English translation (by Graham Anderson) is being published by the redoubtable Dedalus Press, who are also publishing de Poughy’s first novel ‘Chasing The Dream’, which is another tale of a feted courtesan who is on the hunt for true love.'