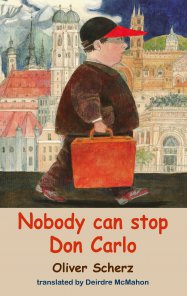 Nobody can stop Don Carlo is a moving tale that deals with parental separation from a child's perspective... Scherz's story is very poignant. There are no perfect endings, but the story is not without hope. It celebrates unconditional love and the heartache that comes with it. It also explores the power of forgiveness and proves that families with difficulties can still enjoy happy times and create enduring positive memories.

‘A young boy sets off on his own, without permission, across Europe, in this German import.Carlo has felt unsettled for five months, two weeks, and eight days—ever since Mama kicked Papa out of the house. Papa was flaky and sometimes disappeared for days, but he was affectionate and robust, and Carlo misses him terribly. Surely if Carlo can reach him, he can bring him back. So, lying to Mama that he’ll be at a friend’s house, this 11-year-old begins at his local train station and heads from Bochum, Germany, to Palermo, Sicily. His trip is a succulent travelogue, flavored with foods and scenic views and feelings. Challenges include lack of funds, suspicious adults everywhere, the need to lie to Mama via text message, and a taxi driver who robs him between Rome and Palermo. Highlights include a dog conveniently chewing a train ticket (who says it wasn’t Carlo’s?), hiding in a lifeboat to stow away on a ferry, a boisterous and kind Italian family ladling up pasta with ham sauce, and the reunion with Papa. Papa and Carlo are both fat; Carlo’s been hassled for it and twice refers to his “mozzarella-belly,” but the narrative viewpoint casts fatness as refreshingly neutral and even makes Carlo’s and Papa’s similar bodies a point of warm connection. Carlo is white, half Sicilian and probably half German.A snug, contemporary adventure—romantic realism, innocent yet hearty.

‘Great news for the children’s books world: Dedalus Books, doubtless known to most Riveting Reviews readers for their thirty-six years of publishing international books in English translation, have launched their first children’s list, under the imprint Young Dedalus. Oliver Scherz’s Nobody Can Stop Don Carlo (translated from the German by Deirdre McMahon) is one of their four launch titles, and it’s a treat.
Carlo lives with his mother in Bochum, western Germany. His father has left home and moved to Palermo, and though he has stayed intermittently in touch, he never quite gets round to visiting. Carlo thinks this problem needs to be fixed, so he decides to travel to Palermo to fetch him. The problem is, Carlo hasn’t told his mother he’s going, and Carlo is only eleven. (He can pass for thirteen, he thinks.) So this is the story of Carlo’s solo journey across Europe to Sicily – just him and his football jersey and his tie and his little suitcase and not quite enough money – and what happens when he gets there.
It’s a short book, and immensely readable, with a nice episodic structure that’s perfect for one-chapter-a-night-before-bedtime. I’ll admit, however, that I was enjoying myself so much, I binged it all in one go. There’s the episode with the dog, the episode with the helpful (and somewhat delinquent) old lady, the episode with the double-crossing taxi driver, the boy on the tractor, and so on. There’s a lot of plot for its ninety pages, which will suit many middle-grade readers (and I suspect would be a fun read-aloud for their parents), and just enough peril to keep the stakes high, but there’s also plenty of character to enrich the experience as well as a lot of humour. While there are a couple of baddies, Carlo finds that most people are kind and hospitable and eager to help, which is a pleasing message these days. However, Scherz allows Carlo’s father to be a more complex character, loving and well intentioned but flawed, so the ending is nicely nuanced, too. And it reads delightfully, in Deidre McMahon’s clear and assured translation. In particular, Scherz/McMahon’s endearing but unfussy voice for Carlo (but also some bits of confident ventriloquizing of the other characters) makes it all very easy to lose oneself in.
I have the other three Young Dedalus books waiting on my TBR pile; if the publisher can keep the standard this high, we’ll all have much to look forward to.’

Eleven-year-old narrator Carlo lives in Bochum, Germany with his mother. His parents are separated and his father is now living in his native Palermo in Sicily. Carlo desperately misses his dad, all five months, two weeks and eight days. There are always promises of planned visits but somehow it never happens. Carlo longs to get his parents back together again and decides to take matters into his own hands and do something about it. He sets off for Palermo on his own, without telling his mother, carrying a few possessions in a suitcase, including his precious football shirt, his ‘fat money roll’ of 210 euros, (after emptying his money-box), and his father’s photo and address in his jacket pocket.

Carlo's journey is certainly not uneventful and there are plenty of episodes, when anything that could go wrong, does, including not having enough money for his fare, outwitting the guard on a train, being robbed by a taxi driver in Rome and being a stowaway on the ferry to Sicily. He also encounters many acts of kindness from the elderly eccentric women who provide refuge on the train to the Italian family who take him in and treat him as one of their own and give him a lift to the Ferry port. Despite the many ups and downs of his adventure Carlo manages to get to Palermo and arrive on his father's doorstep. Now everything will be alright, won't it?

This novella, from one of Germany’s leading authors, Oliver Scherz, translated by Deirdre McMahon, is only 90 pages but it has a tight structure with plenty of plot, larger-than-life characters and humour that permeates throughout the narration. Carlo not only relays his adventures but also the flavours of Italy come through with his descriptions of scenic views and food.

Scherz's protagonist provides a chatty narrative with completely self-deprecating humour especially when describing his of his father’s appearance - “my tie is hanging crookedly and the lovely shirt is stuck to my round mozzarella belly”. There is pathos too with Carlo’s evident yearning to see his dad and for his parents to reunite. A lovely, heart-warming and witty novel that is a joy to read.

Deborah Hallford in OutsideIn World, Book of the Month Choice

'Deirdre McMahon's translation of Oliver Scherz's book "Niemand haelt Don Carlo auf”; *appearing in English as *'Nobody can stop Don Carlo'. Don Carlo is a lovely adventure story narrated by eleven year old Carlo who undertakes a journey from Bochum in Germany to Palermo to bring his Dad home to Germany.'