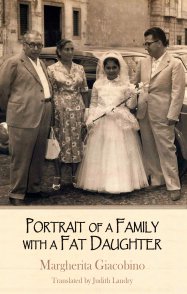 This memoir of four generations of a family provides a vivid and eloquent picture of Italian life stretching from the late 19th century, when the peasant lifestyle had changed little from medieval times, up to the consumer culture of the 1950s. It’s a saga that embraces characters like Maria, who emigrated to the USA for an unwise marriage, returning a few years later with a daughter and paralysis down one side of her body, and the author’s father, Angelo, a feckless chap who was interned in a German POW camp. In writing about her female-dominated family, some of whom she is old enough to remember – most notably the matriarchal grandmother Ninin – Giacobino imbues her account with a real sense of intimacy. She has a powerful feel for traditional Italian culture, her early chapters conjuring up a time when the hierarchy of the family was the only true reality, fairness was unknown and “a moment’s tenderness must last a week”.

Alastair Mabbutt in The Herald

Part fiction, part fact, this book describes four generations of a peasant family living outside Turin between the late 19th century and the 1960s. When her father dies, the author’s eight-year-old mother returns from America to Italy, to be raised by her relatives, marry a feckless husband and run a small shop. The prosperity of this enterprise helps the extended family to emerge from poverty. Beautifully and sympathetically evoking the intense world of working-class Turin, this story is a pleasure to read.

'... well written and a fascinating read. I learned a great deal about aspects of Italian social history through the eyes of this one family. The translation is clever too, trying to keep a flavour of Piedmontese dialect while making sure English-speaking readers are not alienated by the use of too many foreign words. The characters are all vividly portrayed, from Ninin’s drunken and predatory grandfather, to the various aunts, and down to happy-go-lucky dog Pucci. Recommended for anyone interested in an unusual view of 20th century history.'

Margherita Giacobino is an Italian writer and translator, making her first appearance in English with Portrait of a Family with a Fat Daughter. A sweeping narrative covering the 1890s to the 1960s, it tells of an Italian family’s efforts to escape poverty. The narrator’s grandmother emigrates to California, but as tragedy strikes they must return and learn, again, to be Italian. A warm and direct story, memorable for its vivid description and depth of cultural understanding.

Margherita Giacobino’s Portrait of a Family with a Fat Daughter tells the story of a Piedmontese family from a village in the foothills of the Alps, 30 kilometres from Turin. Part memoir and part fiction, it covers the twentieth century, and evokes lives emerging from rural poverty to the affluence of the 1950s, from a diet of polenta and maggoty chestnuts where bread is a luxury to canned vegetables and refrigerators, from goatherding and wool carding to factory work and shopkeeping. It's like a rural version of Elena Ferrante's Neapolitan saga: this family, like Ferrante’s, spoke dialect, not Italian. It’s a powerful and atmospheric record of largely unexplored terrain.

Margaret Drabble's Book of the Year in The Times Literary Supplement

Bookblast interview with the writer, editor and founder of Serpent's Tail

This engaging novel follows four generations of a family living in the Alpine foothills outside Turin, spanning the late nineteenth century to the “economic miracle” of the 1950s and 60s, as they climb out of poverty into a new world of TV dinners and other novelties. It's Margherita Giacobino's first appearance in English, and her prior accomplishments as writer and translator shine through in this finely crafted saga. Combining fact and fiction, the narrator's grandmother emigrates to California and returns to Italy partially paralyzed after complications during childbirth. In the next generation, the narrator's eight-year-old mother returns to Italy upon her father's death, to be raised by distant relatives, become Italian (again), and wed an alluring “man-boy” whose character and time in a German prison camp in World War II are evocatively described. Her small shop gradually expands and lifts the family out of the working class; her studious daughter Margherita grows up amid an extended matriarchal family to become the writer of this book. It has been compared to “a rural version of Elena Ferrante's Neapolitan saga,” but remains staunchly unique in its powerful, atmospheric portrayal of largely unexplored terrain. A winner of the English PEN Award, this sweeping narrative explores what it means to be Italian across oceans and historical epochs. Its vivid descriptions and deep cultural understanding leave a lasting mark.