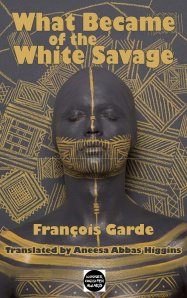 If you like a novel with a lump of true life this is the one for you as the story unfolds from the two mens points of view, Narcisse telling his story and Octave the geographer telling the story of the journey back via a collection of letters. A book about who we really are where we from or where we have grown!

The novel alternates between two narratives, one being that of Narcisse as he is welcomed by an aboriginal tribe. The other takes the form of letters written from Octave, a geographer, to the president of the Paris geographical society. This novel has an interesting concept at this core, it questions what identity means to us and touches on its fluidity. His depiction of the effects of competing cultural values was creative and I found it entertaining. The technique of alternating between the two narratives also worked well to keep me engaged... I found ‘What became of the white savage’ to be an engaging and satisfactory novel.

It's a novel about points of view.from Vallobrun's perspective, Narcisse remains mysterious, but his own tragic image becomes pretty distinct. It's a novel about being out of depth;intellectually,socially,linguistically. As a parable about how our own limitations, whether traveller, researcher,scholar,politician or parent, doom our best efforts to failure, it is entertaining, thought-provoking, heart-breaking and highly recommended.

Francois Garde’s first novel won nine awards after its publication in France in 2012. It is a good book, readable and interesting.

A preoccupation with narrative drives another novel about Europeans adrift in Oceania that has recently made its first appearance in English. François Garde’s What Became of the White Savagefollows the fate of Narcisse Pelletier (1844–94), a cabin boy every bit as true to life as Engelhardt, who was abandoned by his shipmates on a remote peninsula of Australia in 1858. There he was adopted by an Aboriginal tribe with whom he lived for nearly eighteen years until he was “rescued” by the crew of the John Bell. Narcisse had become an Aborigine in language and custom, and though he was reintegrated into French society, Garde challenges us to question precisely what he gained and lost. Austere in construction, the novel alternates between two first-person narratives, the spare elegance of Garde’s prose losing none of its intensity in Aneesa Abbas Higgins’s translation. The first narrative is related by Narcisse, whose stream-of-consciousness register betrays his every febrile emotional shift; the second is by Octave de Vallombrun, a well-meaning geographer who “adopts” Narcisse shortly after his return to Europe. Octave’s narrative is as measured as Narcisse’s is chaotic. It is relayed as one half of a six-year epistolary exchange with the president of the Geographical Society. Octave first describes Narcisse as a “Rosetta Stone”, later as a modern Odysseus struggling towards his nostos. But Octave’s parallels are problematic: the more he inquires into Narcisse, the less he understands.

Though he admits to failure, Octave simultaneously redoubles his efforts and attempts to found a science, “Adamology”, based on the universality of human knowledge. It is another delusion. White Savage offers no revelations or reassurances. It simply forces us – memorably, hauntingly – to consider the possibility that not everything submits to the syntax we invent to describe it.

What Became of the White Savage is a fun read that touches on important ideas of identity, loss and language.

Phoebe Weston-Evans in The Australian