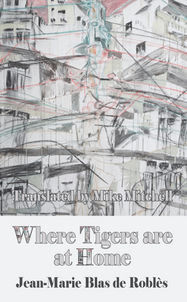 'Eleazard von Wogau, an occasional Reuters correspondent living in semi-retirement in Brazil's Nordeste, is the centre of Jean-Marie Blas de Robles's ambitious, ingenious, hugely enjoyable epic Where Tigers Are At Home. Elezard is the hub from which radiates the spokes of a freewheeling narrative that mixes adventure yarn, magic realism, social comment, political satire, high ideas, popular culture and a standard injection of sadism and sex...

Long in the making, and rejected by thirty-five publishers, this clever, exuberant philosophical novel, the winner of three major French prizes, now appears in a splendidly complicit, fluent, vivid translation by Mike Mitchell. Where Tigers Are At Home favours action over character and quirky knowledge over argument, but is never shallow. At its heart it is a clear, Hobbesian reminder that we do not live in a protected Eden but in a land where power is king and tigers are more at home than we are.'

Writing in French a story set in Brazil, Blas de Roblès simultaneously channels Umberto Eco, Indiana Jones, and Jorge Amado in his internationally acclaimed 800-plus–page riff on science, civilization, and self-interest. Fact and fiction interweave through alternating narratives: a French journalist attempts to translate a 17th-century manuscript recording the life of real-life Jesuit scholar Anathasius Kircher as seen through the eyes of his private secretary; the journalist’s ex-wife searches for rare fossils in the Amazon rain forest; the journalist’s daughter seeks oblivion in drugs and sex; Nelson, a 10-year-old crippled beggar, exists among the dregs of society; Carlotta, wife of a corrupt politician, entertains the elite. The novel opens with journalist Eléazard von Wogau reading about
Kircher’s wide-ranging academic studies and acquaintances with figures like Bernini, Galileo, and Sweden’s Queen Christina. But what begins as a faux metabiography turns to picaresque adventure with erotic escapades, scams, and unexpected changes of fortune: Elaine von Wogau’s geological expedition is attacked in the jungle and must seek refuge among headhunters, while her daughter, Moéma, spirals downward into addiction. From a foul-mouthed macaw to Leonardo’s flying machine, this sprawling novel depicts “the absurdity beneath which the criminal stupidity of men generally
hides.”

This French novel set in North East Brazil follows a French reporter as he writes a book about the polymath Athansisus Kircher, a priest interested in all branches of contemporary knowledge and technology. The action jumps from Brazil to a bio of Kircher. Unusual - one that needs to be read widely.

Stu Allen's Best Books in Translation in 2012 for Book Trust

Late in de Roblès’ remarkable novel, a tribal shaman chants, “Soon the Messenger will guide us to that mountain where visions cascade down uninterruptedly.” This dazzling book is itself such a mountain, overflowing with visions that dramatically enlarge the reader’s imaginative horizons. At the narrative confluence of these surging visions, de Roblès places the complex psyche of Eléazard von Wogau, a French journalist living in Brazil, spending his retirement editing the manuscript of a biography of a seventeenth-century Jesuit, a polymath whose life trajectory exposes theological passions, alchemical secrets, and sensual appetites. Unsettled by the serpentine turns in the life of this dead cleric, Eléazard struggles to cope with the more immediate influence of an ex-wife venturing into a perilous rain forest to do archaeological research and a mercurial daughter hitting the beach with a lesbian lover and a freethinking professor. As Eléazard teeters on the brink of insanity, readers may find their own grip on reality slipping away in a vortex of literary enchantment that fuses arcane scholarship, polymorphic sex, exotic geography, psychedelic drugs, and gruesome violence. Thanks to a gifted translator, English- speaking readers can now understand why European critics have been raving over this astonishing novel, winner of the Prix Médici

Where Tigers are at Home is set in Brazil, in 1982. [The World Cup, going on in the background, supplies the date (which is also around time when author Blas de Roblès was apparently running the local French cultural institute in Fortaleza, which is one of the locales of the novel) -- though in describing Brazil's 2:1 win over the Soviet Union Blas de Roblès frustratingly mistakenly ascribes the second goal to Zico (it was Éder who scored in the 88th minute) and claims that this was the win that put Brazil through into the second round; it was only the first match in group play, and the win didn't assure them of advancing yet (thought they did).] The central figure in the novel is Eléazard von Wogau, who lives in the northeastern town of Alcântara. He is separated from his wife, Elaine, who is making her mark as a paleontologist in Brasilia, and their daughter, Moéma, has moved away from both of them and is a student in Fortaleza. Nominally a foreign correspondent -- but hardly in the thick of any news-reporting in this remote outpost -- Eléazard had, long ago, worked on a thesis on seventeenth century polymath Athanasius Kircher and still: "knew Kircher's works better than anyone -- fifteen years of close acquaintance with a famous unknown are generally sufficient to procure one that useless privilege".
The novel begins with Eléazard having been sent a biographical account of Kircher that is ostensibly the work of one Caspar Schott (better known as Gaspar Schott), who had long been an assistant to the master. Eléazard is commissioned to: "establish the text and provide a commentary", readying it for publication. Much of the novel presents chunks from the Schott-manuscript directly, recounting Kircher's life and adventures (and Schott's with him), but the chapters also alternate with accounts from what Eléazard, Elaine, and Moéma are up to in the present-day.
Kircher is an intriguing figure. Eléazard describes his fascination with this "perverse polymath" -- who wasn't sexually perverse but rather intellectually so in his encyclopaedic ambitions: