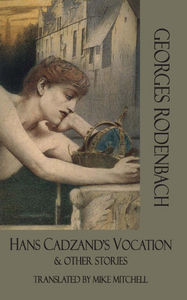 Georges Rodenbach, the Belgian Symbolist, died in 1898 but his writing is so modern it might have been written in this century. He eschews the heavy descriptions of most 19th century oeuvres for a lightness of touch that allows the reader to dance over the pages. Hans Cadzand’s Vocation is a novella taking up most of the book, followed by a few very short stories. Illustrating the motto ’Beware What You Wish For’, it tells the story of Hans, whose father dies when he is a baby, leaving a mother dependent on him for her emotional needs. He becomes an altar boy and while his mother dreads him falling in love, she ignores his religious devotion until he declares he wants to take holy orders. She tries to match him with the pretty daughter of a friend and, when that fails, hires a sexy maid to seduce him. His failure to resist temptation makes him give up his dream but his desolation infects his mother as he still lives with her. Every morning they display their sadness to the world as they make their way to and from church. Rodenbach’s other stories show why he left Bruges to live in Paris. The Belgian city is a place of sadness and death so overwhelming that a Parisian artist and his mistress, who leave stale marriages to live together in Bruges, find the lifeless atmosphere extinguishes their passion and leaves him unable to paint. Priests and religion dominate conventional Bruges, while Paris inspires laughter and art. The citizens of Bruges did not appreciate Rodenbach’s vision and refused to erect a statue of him but, fittingly, his grave in the beautiful Pere Lachaise cemetery in Paris is adorned with an extraordinary statue by Charlotte Besnard of Rodenbach, alive in death, his skin copper-green as he emerges from a grey stone grave, reaching out, rose in hand to the city of the dead.