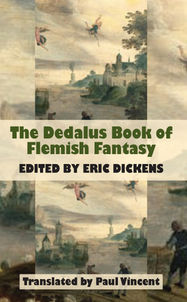 Due to the fierce competition in the global publishing world, Flemish authors - both past and present - are not often translated into English. So The Dedalus Book of Flemish Pantasy has not only been a long-time coming, it's one of the only chances you'll get to find works of both contemporary Flemish authors and those of 100 years ago in English.
'The new book from Britain's Dedalus publishers is certainly a mixed-bag, which is rather one of its delights. Just when you've slogged through JMH Berckmans' "Just Like Rasputin, We Plod Through Mud and Piss in Search of Kellogg's Cornflakes'; which is just as tedious as its title, you come upon Hugo Clans' chilling "Medieval'; which you soon realise is written backwards.
That's not terribly surprising for such a book of fantastical fiction, meaning gothic, surreal, futuristic or loaded with magic realism Flanders, as we know, is a champion of the surreal arts, and now a touch of it - short stories and excerpts ¬are all in one place, from 19th-century Karel van de Woestijne's story of a boy whose time table matches the course of blood through his veins to the very contemporary Saskia de Coster, who takes a girl named Charlotte on a disparaging journey through a kind of haunted fairy tale.
'The book's editor, Eric Dickens, was born to a British father and a Dutch mother. "Dutch literature tends to be more sober, more protestant and realist:' he tells me. "For some reason, the Flemings have gone for a lot more experimental stuff. It might be because of the tensions between the Catholic Church and the socialists, 'That's often in the background:' .
Most notably in the work of the anti-establishment Ward Ruyslinck, whose books span the 1950s to the 1990s. His story "The Slugs" is a battle of wills between a bailiff and a deacon, the first who swears that the slimy infiltrators he sees are reality, the second who swears that what he sees is psychological: self-imposed punishment for sin. 'The book has 23 entries by writers who are generally well known: Louis Paul Boon, Ief
Geeraerts, Felix Timmermans, Peter Verhelst, Kristien Hemmerechts.
Hemmerechts, you might argue, is not known for flights of fancy. '1 wanted to. smuggle more mainstream authors in because this is a bit of a showcase for what the Flemish do in literature;' admits Dickens, a professional translator who lives in Sweden. "So I wanted big authors. Kristien Hemmerechts doesn't really write fantasy; but she does have some half-real, half-fantasy in this story. She wrote a few stories in English in her younger days when she was living in Wales, but after she switched to. Dutch, she was never translated 'That's a real shame:'
Hemmerechts' short story is, in fact, one cf the book's most memorable. 'The author and professor has suffered great loss in her past and spills it out page by page in a story she titled "Fairy Tale':
Children indeed figure heavily throughout the book - almost always injured, lost or abused. Flemish Fantasy almost feels like a history of Belgium's difficult relationship with its children, Boon's "Grim FairyTales" finds a girllosinga breast to a hunter in the forest; Hugo Raes' "The Smell of Fresh Linen" has a child horribly burned by a hot stove; Rachida Lamrabet's beautiful 'i\mmetis 'The Sleeper" pits an unborn child against the psychosis of its mother.
''Subliminal sadism;' notes Dickens. 'The children, however, occasionally fight back, effectively alternating the roles of parent and child, master and servant Lamrabet's character, for instance, decides to play dead inside the womb until his mother starts acting normally. In Walter van den Broeck:'s "Successor to the Throne'; an adolescent hides something, completely controlling the emotions of his overbearing father. Play nice, the authors might be saying, or the children will turn against us, and they will be powerful.
'The stories in Flemish Fantasy are ordered alphabetically by the last name of the author, which makes little sense for the reader, who would generally rather find it in chronological order. 'There is also no notation as to the year each story was published or whether it's a short story or an abstract, which some appear to be. In the back, however, is biographical information about each author, which helps place the stories somewhat And some of them are gems. Peter Terrin's "Clean-Up or 'The Adventures of Abdullah and Me" is narrated by an apparently autistic author that recalls the style of British novelist Mark Haddon's famous The Curious Incident of the Dog in the Night- Time. Annelies Verbeke's "Love, Hope and Dwarfs" finds a jilted lover accepting the kindness of a dwarf couple, but takes drastic action when things go sour.
"The early writings in Dutch were based on a French model;' says Dickens. "The Flemish were educated in French, and right around 1900, they copied French symbolism. Now, Flemish writers, especially the younger ones, are standing on their own two feet."