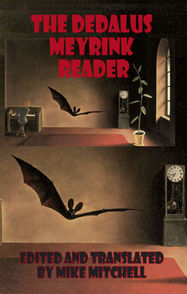 Meyrink? That’ll be Gustav Meyrink – one of the most interesting, and important authors of early 20th-century German Literature; a man who likes to operate on the fringes of the odd. This volume has excerpts from all of his translated books and a whole section of hitherto untranslated material, including the stories from the collection Fledermäuse and autobiographical articles. I’d never previously encountered Meyrink before but he writes tales that really get under your skin and this volume is a perfect primer, containing as it does the whole gamut of his writing from his love of the bizarre, the grotesque and the macabre to the spine-chilling occult tales in his quest to know what is on the Other Side of the Mirror... This collection is another feather in the cap of Dedalus who continue to keep the flame of 20th century literary strangeness alive and well. (Note: They also published the first English language biography of Meyrink back in 2008 which I suspect will also be worth a look.)

All of Meyrink's hallucinatory novels have been published in English by Dedalus in fluent translations by Mike Mitchell, who also wrote an informative biography of Meyrink Vivo(2008). Mitchell has now edited The Dedalus Meyrink Reader, which includes previously untranslated short stories and autobiographical essays, as well as short selections from the novels... The Dedalus Meyrink Reader provides valuable translations of three autobiographical essays he wrote about his spiritual odyssey, from the first appearance of 'the Pilot', through his esoteric explorations, to his saving discovery of yoga and his conversion to Buddhism in 1927.Dedalus has also reissued Meyrink's first novel The Golem(1915) and his last novel, The Angel of the West Window(1927). The three books not only provide an overview of Meyrink's literary concerns, but also of his pecular spiritual journey.