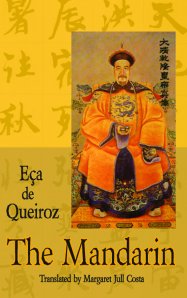 Each of the four masterly stories included in the latest Eca de Queiroz volume from Dedalus - with another fine translation by Margaret Jull Costa - contains an element of fantasy.

In 'The Mandarin', a novella writen in 1880, Teodoro, an ageing and impoverished civil servant, fantasises about becoming rich. The Devil appears before him and offers to grant his wish if Teodoro will pray for the death of a Mandarin in distant China - the French excpression tuer le mandarin means 'to harm someone whom you know will never meet in order to gain some personal advantage and in the certain knowledge that you never will be punished'. Teodoro duly inherits a Mandarin's fortune and enters into a life of luxury, but remorse drives him to China in a futile search for the dead man's family. He returns to Lisbon haunted by the crime.

The last three short stories deal in turn with a man's obsessive love for a woman,'a theme that runs through much of Eca's work'. 'The idiosyncracies of a Young Blonde Woman' was written in 1873. Macario endures years of poverty and separation from the pretty but enigmatic Luisa, but as he is about to become engaged to her an unsettling incident crushes his romantic ideal. In 'The Hanged Man'(1885), set in Spain, Don Ruy de Cardenas falls in love with Don Alonso. In a jealous rage, Alonso forces her to write a letter that will lure Ruy to his death. On his way to the 'assignation', Ruy passes Hangman's Hill, where a supernatural event brings fateful consequences. The short story 'Jose Matias'(1897) chronicles the long years of Jose's passionate love for Elisa, during which he secretly watches her windows 'with extreme refinement of spirituality and devotion'.

A brilliant mischievous essay in fantasy chinoiserie, irreverently subverting the trope, created half a century earlier by Balzac in La Peau de chagrin, of the Oriental curse masquerading as a blessing. In the same Dedalus collection of Eca's short fiction lies a late gem,'Jose Matias', a love story told at a funeral by a Hegelian philosopher, in which the issue of the narrator's own relationship with reality adds a comically ambiguous layer to the tale.

'My favourite antihero is Teodoro, the wimpish clerk who becomes suddenly rich beyond the dreams of avarice in Eça de Queiróz’ novella “The Mandarin.” Eça is a master of the absurd and his novels are full of such nincompoops, our cowardly alter egos.'