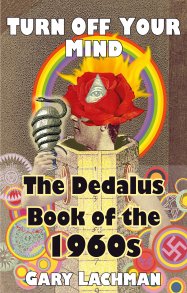 Turn Off Your Mind depicts the late-Sixties subcultural craze for the occult with graphic precision and without the whiff of Creative Writing Workshops.

Jonathan Meades in The New Statesman

A parish priest I know, like a good shepherd, ever vigilant for his flock, recommended Turn Off Your Mind to me, to gain a better understanding of the depths of cultural and moral crisis affecting our society.

Francis Slobodnik, The American Society for the Defense of Tradition, Family and Property

He has produced an impressively researched guide to the odder aspects of a weird decade. Lachman reveals the Sixties as a period when the credulous were willingly led by the duplicitous. Spiritual tourists resurrected forgotten gurus like Gurdjieff, Ouspensky, Blavatsky and the creepy Crowley.
Lachman notes that the fraudulent Carlos Castaneda was published by the University of California. Such was the strange power of the repellent Charles Manson that Rolling Stone almost ran a cover declaring "Manson is innocent", until the paper interviewed him. The result was more accurately headlined: "Is this the most dangerous man alive?"
There is much in Lachman's book to entertain and inform those who wished they had lived through the Sixties and those who did but can't remember. If you want to know about, say, beatnik king Brion Gysin, ley-line apostle John Michell, and zen master Alan Watts, this is the place to start.

Chris Hirst in The Independent's paperback of the week

How were the Sixties for you? Did you put flowers in your hair? Did you dig the underground? Well, you were dancing on the surface, baby. You were lucky not to fall into the dark side, where the magical and mystical became the shadowy occult. So, when we sang “Give peace a chance”, the Manson Family killed Sharon Tate and — Lachman says — did for the hippy-dippy optimism of the flower generation. This revisionist anthology of the dark magic of the Sixties is a night-blooming bouquet of the subversive ideas and practices beneath the superficial innocence of an ambiguous decade.

Ian Finlayson in The Times

"Lachman writes about philosophical and mystical ideas with exceptional grace, forcefulness and clarity."