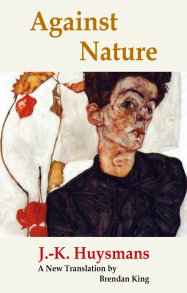 Huysmans' study of obsession and aesthetics got up no end of reviewers' noses on its 1884 publication. It’s not hard to see why: decadent aristocrat Jean Floressas des Esseintes, afflicted by nerves so grievous they cause his spine to freeze when he sees a servant wringing out washing, takes turns kicking out at classical poets, modern novelists and the church. The poor are grotesque, the rich are decaying and the bourgeoisie simply insufferable. Only Dickens, Baudelaire and the odd enema provide respite. Cloistered in an opulent house in the suburbs of Paris, des Esseintes undertakes a series of experiments in living which prove to be an absolute hoot. He decorates an unfortunate tortoise with precious stones, tries to go to England, but only makes it as far as a nearby pub, and attempts to turn an urchin into a killer by buying him credit at a brothel. This largely plotless mix of bilious satire, broad comedy and literary criticism may have lost some of its immediacy, but it remains a captivating, contradictory work of art.

Perhaps the key book of Decadence, Huysmans’s curious novel can be considered many things, though a style manual comes closest to defining it and this sparkling new translation by Brendan King is both overdue and to be warmly welcomed.

Books for Christmas by Peter Burton in Three Sixty Magazine

Only the counter-intuitive mind would readily seek a home for late nineteenth-century French decadence in the Cambridgeshire village of Sawtry. But over the years the Dedalus publication house, based just west of the Fens, has dedicated itself to this unlikely cause with admirable tenacity. This fine rendition of the “Bible of Decadence”, À Rebours (1884), is the latest of seven works by J.-K. Huysmans to have appeared in translation with Dedalus. Its translator brings to bear the profound and precise knowledge borne of a recently completed PhD on a perennially cultish writer, known to his acolytes as J-K. (pronounced à la française, not in Rowling).
Given the sensible assumption that À Rebours is the “poisonous” French book which bewitches Dorian Gray, students of Oscar Wilde are often led to translations of Huysmans, and it is not surprising that King’s mellifluous version finds competition in Margaret Mauldon’s for Oxford World’s Classics and Robert Baldick’s earlier Penguin translation (updated in 2003 by Patrick McGuinness).

Originally published in 1884, Huysmans’ book instantly divided critics between those who saw it as a masterpiece and those with more disparaging opinions. Brendan King’s new translation of Against Nature brings to the fore questions of literary taste and attitude for a new generation.

This classic fin de siècle novel follows the Frenchman, des Esseintes – an aesthete who tries to escape his own decadence, as well of that of Parisian society, by retreating to the country. Ironically, this retreat involves furnishing his house with art, books and flowers, which are analysed in minute detail. In one instance, whilst selecting paint, he even bejewels a tortoise to ensure the colours he has selected show off the room to the utmost effect. With no structured plot, the text is mainly comprised of book reviews from the character’s perspective in which he details classical writers and philosophers, pointing out the pros and cons of their work. While these descriptions can seem superfluous, Huysmans uses them to create a clever satire where the circumlocutions des Esseintes deplores in others’ writing are demonstrated in the text through his interpretations.

These critiques are punctuated with des Esseintes’ memories (often quite disturbing) as well as his ennui and ailments which seem inherently linked with his enforced literary lifestyle and symptomatic of everything he is trying to escape. Against Nature is often humorous and self-reflective, which compensates for the lengthy book reviews within the novel which can alienate the reader. Unless one is familiar with several literary traditions, it can feel laborious consulting the notes in the back of the edition. Probably not a holiday read, but still an engaging examination of the literary world.

for a novel about the highs and lows of isolation, I’d choose J.K. Huysmans’ Against Nature.