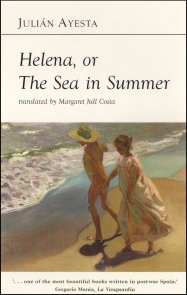 The summer made word…a small miracle that explodes on every page.

…one of the most beautiful books written in post-war Spain.

A 100-page novella about “summer, childhood, and first love,” this book has received decent praise from Spanish critics. Gregorio Moran from La Vanguardia even called it “one of the most beautiful books written in post-war Spain.” As evidenced in the sample this is a lyrical, rhythmic book, and although it doesn’t immediately appeal to me, I would check this out simply because it’s translated by Margaret Jull Costa and published by Dedalus. In my opinion, Dedalus is one of those publishers—like an Archipelago, Dalkey Archive, New Directions, and others—that has earned a level of brand loyalty—readers know that if they buy a Dedalus book, it will be high-quality.

Books are often about the same things: the beach, a fire, a memory of sound and light. "The cherry jam shone bright red amongst the black and yellow wasps, and the wind stirred the branches of the oak trees, and spots of sunlight raced over the moss." This sentence, written by Julián Ayesta (1919-96), a Spanish diplomat and sometime author, could stand in for any number of literary memories.

There are some books that we talk about with each other. What did Isabella Archer have in mind, at the end of "The Portrait of a Lady," when James reported that she now finally knew where to turn, that now, to her, "there was a very straight path"? More than one reader is prepared to discuss the question. But only a few of the very most famous novels stay out in the open like this. Most remain private affairs, bottled, stored away.

The cherry jam shone bright red ... The coffee shone too, black amongst the cigar ash in the saucer. And the men all wore lopsided grins because they had a cigar in their mouth and talked and laughed like toothless old crocks, poking out tongues bright with spit as they blew out clouds of blue smoke.

Julián Ayesta's one published novel has only part of what we want from fiction; it is short on conflict and long on atmosphere. Originally published in 1952, and titled "Helena, or the Sea in Summer" (Dedalus, 124 pages, $12.99), this short book sets an idyllic series of early adolescent scenes against the tense backdrop of pre-revolutionary Spain. It reads like repeated sips from Keats's ideal cup of inspiration: "O for a beaker full of the warm South, / Full of the true, the blushful Hippocrene." It is slight, but intoxicating.

Ayesta himself called his novel "a Mediterranean reaction against the kind of angst-ridden pseudo-existentialism that invents a life far removed from the human life that I have invented for Helena." But that battle, between gritty pseudo-existentialists and more romantic writers, is no longer ours.

Translated now by Margaret Jull Costa, after more than half a century, "Helena" will have little to do with literary debates. Published by a small English press, it will probably not even be the subject of much discussion at all, and will likely get only a few reviews. Reading it is like an unplanned summer's nap, a dream, the kind that, however beautiful, is not likely to be remembered afterward:

And we set off together, full of love, towards the great lands of the Afternoon. The sun — the Sun! — was snoring above the apple trees, and the fields were full of patches of sunlight. And there were woods of blue-black eucalyptus trees. And we felt a strange fear of those trees.

Reviewing a book like "Helena" is naturally a labor of love, perhaps lightened by a whisper of self-congratulation — translated literature has become a kind of cause, and it feels good to take part. To the extent that advocating for a small book is futile, it might also be honorable.

But the real experience of reading and of writing about a book like "Helena" has little to do with big-picture calculations. Perhaps it is truly lamentable that so few books are translated into English, but the truth is that there are still too many to keep track of — I recently heard the figure of between 350 and 400 a year — and each one is a rabbit hole into its own world.

Amongst the men's cigar smoke, the cutlery tinkled like the bells on a herd of goats grazing lazily in the noontide heat haze. It was siesta time, all soft and warm, all stretching and yawning, drowsing in the shade of a blue wood, in a deep dark land, in an age before Christ.

Then I could resist no longer and I escaped to my room: I got undressed, pulled on my bathing trunks and raced out the kitchen door. I ran down the hill, with the wind in my mouth, and Helena was waiting for me at the garden gate.

A book like "Helena" reminds you how immersive fiction can be — even if a book, like this one, only covers ground for which we are already nostalgic, it still feels good to be transported there again. Ayesta's translator, Ms. Costa, ventures that his is "a novel with all the non-essential chapters omitted." Only the piercing sensual epiphanies remain. Forget the question of world literature, of place and reputation and chains of influence; reading "Helena" is first of all an experience in the present tense.

And it is an experience like many others — if you read it, it will dissolve into your memory, another Mediterranean story about young, bracing love. More than most books, however, "Helena" seems to know its own forgettable fate, even to relish it, to consider itself only an instant in a long diurnal tradition: "The sun — the Sun! — was snoring above the apple trees."

Not so much a structured story, Helena, or the Sea in Summer by Julian Ayesta, offers images, snapshots of an emerging adolescence and romantic love. Margaret Jull Costa superbly translates this subtle glimpse into the young narrator’s life in mid-twentieth century Spain and his growing interest for a young girl Helena. The narrator’s voice subtly changes as he grows older, starting funny and innocent, then spontaneous and poetic, and finally morally conflicted and emotional. The tale reads distinctly modernist, quickly weaved in a stream of consciousness style, replete with unusual metaphors and tangential asides. Readers accustomed to strong plots may grow inpatient with this whimsical tale. Characters, too, seem only roughly sketched. But despite the meandering plot and incompletely developed characters, Ayesta masterfully captures adolescence, Spanish family life, and Spain’s changing relationship with the Catholic Church. Costa, too, proves just as skilful capturing the Spanish voice in this English translation. For a short, prose-poetry read, look no further than Helena, or the Sea in Summer.