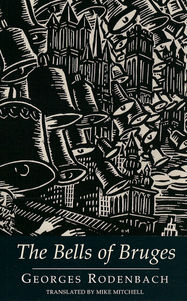 The confusion and obsession of love is thoroughly explored through the character of Joris Borlut, a man juggling three love affairs. Rodenbach offers an intriguing storyline, which is heavy in places but in all a fascinating tale. Descriptively written with an extremely detailed account of Bruges.

Abi Salter in The Big Issue

There are few novels that quickly astound. This is one of them.Flawlessly translated, this elegiac romance, first publshed in 1897, is a masterpiece of sublime power. Joris Borluut, the town bell ringer,marries the tempestuous Barbara but the match turns sour and an affair with her sister ensues. Acutely rendered as this thread is, it is always subservient to the real story, that of Bruges itself.

Martin Tierney in The Herald

A story about obsessive love; Joris initially falls for the brash Barbara, but then enters into an affair with her very different sister. However, after they are discovered he retreats into his own world; rediscovering his love of the city as he tries to save it from development. Rodenbach paints the city of Bruges so richly with his words that it jumps from the page, and this excellent translation by Mike Mitchell of the Belgian's novelist's work, does his words justice.

Rodenbach's contribution to the fin-de-siecle imaginary was the dead city. In poetry and in prose, in his short stories and journalism, it is the dead city - and Bruges above all - that he dramatizes and celebrates… The language question occurs in The Bells of Bruges, along with an unexpectedly wide range of other social, political and economic issues. The novel appeared in 1897, five years after Rodenbach's hugely successful Bruges-la-morte. Where Bruges-la-morte was a short, poetic psycho-drama of death and eroticism, The Bells of Bruges (given here in Mike Mitchell’s nuanced but unfussy translation) is a long and crowded novel that touches on everything from nineteenth-century obsessions with progress and decline, to tourism and town planning… There are intertwined plots as there are in Bruges-la-morte. Borluut is caught between two women, the dark, fiery Barbara and the ethereal, pale Godelieve. Between them they represent, on the one hand,, the earthy, Latin side of Belgian culture (Barbara is more than once referred to as a Spanish beauty, an allusion to Flander's history as a Spanish colony), and its Nordic, mystical side, Rodenbach's obsessive symmetry is such that he provides Borluut with bells that also represent this: a small, clear, tuneful bell and a large, dark bell inlaid with obscene orgiastic images, a 'bronze dress' up which he loses himself. Sex and death are never far away in Rodenbach, either from each other or from the surface of the story. As the novel's extraordinary climax shows, The Bells of Bruges, is no exception.

Mike Mitchell’s translation of The Bells of Bruges opens with one of the most arresting scenes I read in the shortlist. A crowd gathers to hear bell-ringers competefor the office of town carilloneur.

'Here, in the meditative land of Flanders, among the damp mists so antagonistic
to the brilliance of fire, the carillon takes their place. It is a display of fireworks
that one hears: flare, rockets, showers, a thousand sparks of sound which colour
the air for visionary eyes alerted by hearing.’

The novel is a story of love and obsession, of two beautiful sisters and a man who
marries the 'wrong' sister, of an artist in sound whose dedication to his office has
something terrible in it. But the dominant character is the city of Bruges, which comes to possess the reader’s imagination as it has possessed Rodenbach's and then Mitchell's. This is a beguiling translation, which captures a Lawrentian intensity of sensuous experience.

Your list of the Ten of the best:bells could have included Georges Rodenbach's 1897 novel Le Carillonneur, translated into English for the first time in 2007 as The Bells of Bruges.Carillonneur Joris Borluut carries on with two sisters, each of whom is represented by a different bell in the belfry, the little bell with 'pure song' and the 'great Bell of Lust':'He had looked up into the bell as if he were looking up her dress.'

Nicholas Royle in The Guardian

'Over the summer I plan to read Alain Corbin’s A History of Silence (Polity). Corbin writes sparely, beautifully and with an exquisite fastidiousness about, well… something and nothing: quiet. In the first chapter he recommends George Rodenbach’s The Bells of Bruges (Dedalus, translated by Mike Mitchell).'