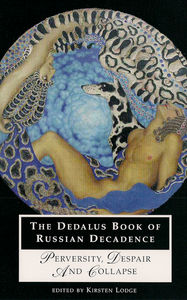 The word magisterial is overused, but in this case, Lodge has indeed produced an authoritative collection, excellently introduced and with good, if short, biographies of the writers which help licsate them, and their corpus, in the wider litersry heritsge.It deserves to be read by anybody who wishes to understand Russian Literature and it will reward the reader immensely.

Kate Griffin in The Big Issue

By the end of the 19th century hope in Russia that literature might have provided either political or spiritual salvation had withered, leaving writers ripe to fall under the spell of JK Huysmans' apocalyptic decadence. The French-born movement, which espoused the notion that 'civilisation is in decline, reality as it exists is contemptible, and that the decadent hero, who is neurotic and sexually deviant, must create an alternative world for himself alone', had a direct appeal to writers such as Valery Briusov and Feodor Sologub. However, what overthrew that civilisation ensured that a literature concerned with ’perversity, despair and collapse’ was hardly known for much of the 20th century. The stories and poems here wallow in lust, madness and death. Briusov’s 'Now that I'm Awake' is Poe taken to extremes when a husband discovers that a drug-induced fantasy with his innocent wife is real. Sologub's 'The Poisoned Garden' is ruled by a femme fatale and plays with the fairy-tale genre. Lodge’s collection is not to be taken in large helpings, but it is a welcome introduction to an important strand of Russian literature.

A nifty little collection of all things over the top, macabre and, funnily enough, decadent; this wonderful collection of Russian short stories –many translated into English for the first time –contain enough sordid adventures to turn any alabaster cheek rouge. Including tales from the likes of Bruisov, Andreyev and Sologub the calibre is high, the translations excellent and the whole work has the air of high brow revelry that only Russian decadents could ever achieve.

A newly released collection of short stories and poetry, most of which have never before been available in English, captures the fin de siecle sense of despair and decay in decadent Russian writing. The back cover promises ‘ page after page of cruelty, corruption, sensuality, desperation and death,’ and the book does not disappoint.
Dominated by the works of Valery Briusov and Fedor Sologub, the book also contains work by Zinaida Gippius, Leonid Andreyev and Alexander Blok. The book is filled with Russian Dorian Grays, fulfilling wild and perverse sensual fantasies and leading themselves inexorably to ruin… it provides fascinating insight into the minds of writers who felt a sense of moral decay – and perhaps had a feeling of the political and social decay of the system they lived in - at the start of the twentieth century.

The Dedalus Book of Russian Decadence, subtitled Perversity, Despair and Collapse, is a bravura wallow in emotional filth and would cheer anyone up. An hour or two in the company of these panting self-poisoners will make you feel bloomingly fit.

Duncan Fallowell in Summer Reading in The New Statesman