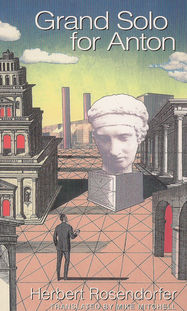 This is a tremendously inventive novel that attempts to ask some important questions about how Western culture has developed.

What would you do, if waking up one morning, you discovered everyone else in the world had vanished? Would you take a peek into the finest private art galleries, raid the kitchens of the best restaurants, mourn the loss of your fellow human beings, or would you steal a gun and shoot some dogs? Anton L. the eccentric hero in Rosendorfer's off-kilter novel goes for the latter option and thus begins a good old philosophical debate about the nature of man, society and other such high-minded palaver. Ideas punctured only by dirty pants, champagne binges and lots of dead dogs: weird and yet strangely amusing stuff.

Anton L. Wakes up and he is the only person left on earth. All that is left of the world's population are the clothes. As Anton wanders around his empty world he encounters rabid dogs, escaped circus animals and finds a letter that hints at what happened to the rest of the world. The book is wonderfully odd, with Anton's dreams and memories gently crisscrossing with the real world. The writing is superb, brimming with satire, humour, and most other things you'd ever want.

On Tuesday, June 25, 1973, small, odd Anton L. wakes up as the only person left in his city and, apparently, the world. Everyone else has vanished. The omniscient narrator leads us through the succeeding several months of Anton's solitude as well as many episodes in his and several acquaintances' pasts. The narrator even intrudes a bit, rather undermining our suspended disbelief but supporting the conceit that takes over the novel and Anton; to wit, Stephane Mallarme's proposition (and this book's epigraph), "The ultimate aim of the world is a book." For in his foraging and hunting in the rapidly renaturalized city, Anton discovers traces of a circle of eccentric scholars searching for a book that explains everything and is located somewhere in the city. While reacting to winter freezes, spring floods, and the surprisingly rapid collapses of many unmaintained buildings, Anton finds the book. This is high-end sf/fantasy: impeccably literary, eruditely witty, deliciously open-ended. Its admirers will love it to distraction.