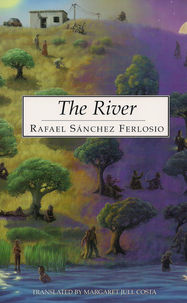 Taking place on a single sweltering August Sunday, Sanchez Ferlosio's excellent 1955 novel reads almost like a script, so privileged a position does it accord dialogue. By way of a welter of largely innocuous and inconsequential conversations between villagers and Madrilenos come to relax by the water's edge, the author achieves a nonetheless utterly captivating realism even as he subtly introduces symbolist intimations of Civil War battles and death stalking the land.

First published in 1956, Ferlosio's work was well described as an example of "the novel as tape-recorder". The plot is minimal - a group of friends have a picnic by the river Jarama, scene of a bloody battle during the Spanish Civil War, intercut with the conversations of the denizens of the local bar. Like a play by Eugene O'Neill, nothing much happens but everything is revealed. Although written under Franco's regime, and consequently social realist in genre, The River manages to subtly hint at the unresolved conflicts of the past, and tiny, specific details unfurl into whole vistas of grief and deprivation. Towards the end there is a predictable 'drama', which rather detracts from the luminously observed ordinariness of the best parts of the book.

The son of the Francoist intellectual Rafael Sanchez Mazas (the dandyist anti-hero of Javier Cerca’s great Soldier of Salamist), Sanchez Ferlosio was still in his twenties when, in 1955, he wrote this remarkable landmark of Spanish realist fiction. Like some dappled Impressionist canvas, but with grimmer undertones, the novel sends a pack of day-trippers from stifling Madrid out into the country, to chat, flirt, dream and remember by the Jarama. A dialogue-driven portrait of Spaniards at play, The River – published with Franco's tyranny still in full spate - also acts as a sly political fable, as the Jarama (site of a bloody Civil War battle) slowly yields its secrets.

Originally published in 1956, this stunning account of Spanish history and individual lives set against a river that has flowed throughout, is the first English translation of a European classic. The Spanish civil war was the setting for a bloody month long battle between the Republicans and the Nationalists during which nearly fifty thousand lives were lost across the River Jarama. Twenty years later it has become a favoured relaxation spot for picnics, families and lovers losing themselves for an afternoon. But the scene of such carnage is never far from its next victim and The River listens to conversations of ordinary and profoundly recognisable lives.

He is an exceptional novelist, a man of outstanding moral identity and of an intellectual capacity like none other in Spain. I cannot imagine a more deserved Premio Cervantes winner.

If I were to be asked one name, only one, from the Spanish post-war generation of writers, with the greatest possibilities of survival, that is to say, with standards of literary immortality, I would say, without a shadow of doubt, the name of Rafael Sanchez Ferlosio.

Ferlosio will be remembered as a novelist: the author of one of the most indispensable books in Spanish post–war literature, El Jarama(The River). It would be impossible to write the history of the novel for that period omitting El Jarama (The River).

Ferlosio is the greatest living writer in Spain. The best and the most daring explorer of the soul of words.

He is a rigorous thinker, original and not affected by literary fashions. His Spanish is beautiful and he is a true craftsman of the good language.