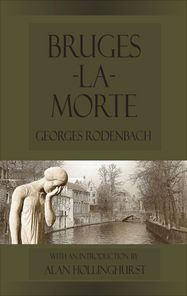 A widower of five years, Hugues wanders Bruges in mourning. Heavy with a spectral misery, Rodenbach's symbolist novel, first published in France in 1892, is a compelling albeit flawed work. As Alan Hollinghurst remarks in his introduction, it is a novel 'by turns crude and subtle', but although not a classic, it is also significantly more than a curiosity. There is an opiatic quality to the writing which at its best hovers on poetry's border. Hugues's relationship with the dancer who closely resembles his dead wife provides the plot, but the book’s real heart lies in the descriptions of Bruges itself, and its 'amalgam of greyish drowsiness'.

Dedalus should be treasured: a small independent publisher that regularly produces works of European genius at which the behemoths wouldn't sniff. If the corporations did care to look at this new work, they would find, on the surface, a precursor to W G Sebald, a Symbolist vision of the city that lays the way for Aragon and Joyce, and a macabre story of obsessive love and transfiguring horror that is midway between Robert Browning and Tod Browning. Bruges, "an amalgam of greyish drowsiness", is the setting and spur; Hugues is a widower who finds a dancer nearly identical to his lost love. "Nearly" is here the operative word. This is a little masterpiece, from a brave publisher. If only Scotland could boast the same.

Dedalus’s new edition of Georges Rodenbach’s Bruges-la-Morte (1892) has a palpable sense of a collaborative project, as the many credits, explanations, introductions and endnotes testify. The atmospheric novel has been reincarnated, but this has not been a spontaneous occurrence; nevertheless, it is a successful exhumation. The translators remain faithful to the substance and style of the original, and Alan Hollinghurst’s introduction is stimulating and heartfelt, explaining Rodenbach’s idiosyncrasies without apologizing for them.

Hugues Viane, the protagonist, has mourned his dead wife for ten years. Compelled by grief, he has moved to Bruges, feeling in the town’s empty streets an affinity with his inconsolable passion. He lives alone, and creates a shrine to his wife. When dusk falls, he wanders the desolate streets, ‘ looking for analogies to his grief in deserted canals and ecclesiastical districts’. It is in moments like these that we witness ’the Town as an essential character’, communicating through its bells, fine rain and ambivalent silence. One evening Hugues encounters a woman who so resembles his wife that he believes her to be an apparition. She is Jane Scott, a dancer, whom he pursues to the town’s theatre. Immediately obsessed, he gains her acquaintance and initiates a relationship, fervently believing that she is indeed his wife reborn. Despite his infatuation, he soon discovers the disparity between his death-negating fantasy and the vulgar, modern reality. Meanwhile, Jane exploits him financially and his faithful but devoutly Catholic servant Barbe leaves her disreputable master’s service. Finally abandoned, Hugues confronts Jane before the Gothic scenery of his wife’s shrine.

The plot may seem thin but, as Hollinghurst argues, Bruges-la-Morte should not be judged like other novels. In this Symbolist work, mirrors and metaphors take on a special significance. Rodenbach makes a case for the ‘indefinable power’ of resemblance, appealing to the two contradictory needs of human nature: habit and novelty’. Metaphor – like translation, it might be said- endows old worlds with new life. Resemblance is revealed to be a life, however, just as words are lies, merely metaphors for the concepts they represent. The only assured resemblance Rodenbach can foresee is death, and accordingly the fear of death pervades the novel, deepened by the many reflecting surfaces.

Will Stone’s new photographs constitute an attempt to contribute to the novel’s complicated history of illustration. Perhaps they symbolically mirror the intrusive Doppelganger Jane. Their quality is actually below that of the originals Rodenbach selected, although they do implicitly observe the essential stasis of this medieval town, to which Rodenbach returned obsessively in his own work.

This is one of the greatest novels ever written about grief, loneliness and isolation; and such subjects are, alas, always relevant these days. (Those suffering similar personal circumstances will find it remarkably consoling.) It is the kind of book, I kept thinking, that should have been turned into an opera by Debussy, along the lines of what he did with Pelléas et Mélisande, by Rodenbach's contemporary and fellow-townsman Maeterlinck. As it turns out, Erich Korngold did such a thing in 1920, but the Nazis banned it, and I'm not sure that he would have had the right musical attitude. If Debussy hadn't done it, Alban Berg would have been ideal.

I keep thinking about music so much because so much music resides in the words, even in (the very able) translation. This is a book which is not only richly, almost oppressively, atmospheric: it is about atmosphere, about how a city can be a state of mind as well as a geographical entity. It has its shocks and its melodrama: but it is a haunting, and a haunted work. Congratulations to Dedalus for reviving it.

Nick Lezard's paperback of the week in The Guardian

First published in 1892 and translated from the French, this novel deals with one man’s embrace of the decaying city of Bruges as he mourns his dead wife. As protagonist Hugues Viane attempts to come to terms with his loss, he becomes fixated with a dancer who resembles his wife.

Bruges-La-Morte, which first appeared to an unexpecting public in 1892, concerns the fate of Hugues Viane, a widower who has turned to the melancholy, decaying city of Bruges as the ideal location in which to mourn his wife and as a suitable haven for the narcissistic perambulations of his inexorably disturbed spirit. Bruges, the ‘dead city’, becomes the image of his dead wife and thus allows him to endure the unbearable loss by systematically following its mournful labyrinth of streets and canals in a cyclical promenade of reflection and allusion. The story itself centres around Hugues’ obsession with a young dancer whom he believes is the double of his beloved wife. Grotesque humour mingles with poignancy in this metaphorically dense and visionary novel, which is the ultimate evocation of Rodenback’s lifelong love affair with the enduring mystery and haunting mortuary atmosphere of Bruges. This is a new translation of the one of the great masterpieces of the symbolist period which also contains an illuminating introduction by Alan Hollinghurst.

First published in 1892 and translated from the French, this novel deals with one man's embrace of the decaying city of Bruges as he mourns his dead wife. As protagonist Hughes Viane attempts to come to terms with his loss, he becomes fixiated with a dancer who resembles his wife.

This novel by Belgian author Georges Rodenbach was first published in 1892. It begins with Hugues Viane mooching around Bruges. The reason for his blues? His young wife has died but, as it turns out, the decaying city of Bruges is the ideal place for a spot of moping. During his daily perambulations however, he spots a young actress who is the exact double of his dead wife and he becomes transfixed. While I was reading it I thought this must have been the book that influenced Hitchcock’s ‘Vertigo’ but, as it turns out, this is the book that influenced the book that influenced ‘Vertigo’. It’s a beautiful piece of symbolism, infused with a really haunting air, and it’s also unusual in that it was the first novel that came complete with photographs, in this case, images of a suitably forlorn Bruges (all reproduced here). A treat.

Bruges is a city that inspires gothic responses. With its gargoyles and belfries, its sombre canals and tolling church bells, it provided the perfect setting for Georges Rodenbach’s protagonist to mourn his spouse in the Symbolist novel of 1892 Bruges-la-Morte: ‘Bruges was his dead wife. And his dead wife was Bruges. The two were united in a like destiny. It was Bruges-la-Morte, the dead town entombed in its stone quais, with the arteries of its canals cold once the great pulse of the sea had ceased beating in them.’ Conservative Brugians at the time – Catholics in particular – weren’t thrilled with the picture Rodenbach painted, which they felt didn’t chime with the Christian image they wished to project. But, proving there’s no such thing as bad publicity, tourist numbers were swelled by the book, many of whose readers were compelled to experience the mist-soaked melancholy of the place for themselves.