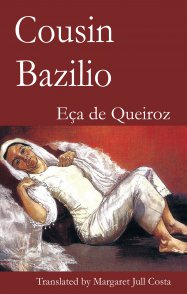 Sauciness and scandal come as part of the enticing package in this 1878 European classic by Portugal's most celebrated 19th century writer. Cousin Bazilio might not be his best work, but it certainly drew the most attention when it was originally published, for all the wrong reasons;specifically deceitful lusts, a series of characters - some aristocratic hedonistic socialites, others colourful aspiring servants, but all connected by a string of naughty secrets. The tale rips along at a pace that could outdo any modern soap, while the social realist side of de Queiroz shows up the hypocritical limitations laid down by society, particularly on female morality. A classic then, but distinctly alternative in every way.

De Queiroz' use of description is as visually focused as his wit is sharp.As translated by Jull Costa, de Queiroz' language is capable of glowing softly as well as casting a glaring light.It brings a sparkling, brilliant clarity and unrelenting sense of social absurdity that makes it essentially youthful.

Barbara Strickland in The Austin Chronicle

For a book originally published in 1878,Cousin Bazilio is astonishingly modern. It reeks of petty jealousies, middle-class ennui and of smouldering, repressed sexuality.There's even one bit where nasty old Juliana is sniffing Luisa's underwear to see if she's been putting it about. No British writer of the period would come anywhere near this sort of thing.

Adultery, blackmail, sentimentality and lust all come under Eca’s scrutiny. Sins are scattered amid a gallery of vivid characters, central of which are the adulterous heroine, her first love, the cuckolded husband, and most importantly, the maid. This cunning portrayal of life below stairs casts a cold eye across the hypocrisy of 'respectability,' recreating the sultry summer heat of Lisbon and the tensions and passions underlying both the refinements of the wealthy and the loyalty of the servants. Sheer brilliance.

Cousin Bazilio still has considerable impact. In part, this is due to Queiroz's ability to convey the sensuality and heat that permeates not only nature but human beings as well.One of Luiza's few friends,Leopoldina, is described as ripe fruit:'her breasts had the firm, harmonious form of two lovely lemon halves;the luscious ample line of her hips and certain voluptuous movements of her waist attracted men's lustful glances';Queiroz is well aware that passion is an essential part of human nature.It is this awareness that gives Queiroz's writing its edge.

Cousin Bazilio was a popular novel when it was first released in 1878, first published in Portugal and then translated around the world. Margaret Jull Costa, a translator much praised and enjoyed in the past, has done a fantastic job of re-creating the parody, contradictions and marital politics that this book portrays.
Sprawled across 440 pages, the romantic hypocrisy of 19th century Lisbon is shown through the vivid characters of Luiza, the air-head wife, Jorge, the outwardly devoted husband, Leaopoldina, the openly sexual source of gossip and many other sexually confined and confused characters.
The scrutiny of the servants reveals the lewd underbelly of respectable life as their sins are scattered across the adulterous characters.
Blackmail, sentimentality and lust… Secrets the characters pretend they don’t have.

The painting of The Bride by the celebrated artist Paula Rego adorns the cover of this book. Fittingly so. For Eca de Queiroz is her favourite author. Not merely because of their shared Portuguese roots, but, like her, he punctured the hypocrisy of Portuguese society.
Too often overlooked, Eca de Quieroz stands with Flaubert, Balzac and Zola in the canon of great European writers. His tales of nineteenth century bourgeois life have an undercurrent of anger, often aimed at the church with its difference between its preaching and its practice. Yet the wonderful characters he creates are his true artistic legacy.
In Cousin Bazilio, the eponymous protagonist sets out to seduce his cousin Luiza, a married woman, whose husband is out of Lisbon on business. Bazilio is merely proving his power,
but innocent Luiza believes his protestations of undying love and succumbs. Meanwhile, the street gossips talk of scandal and her servant Juliana seeks to blackmail her.
One of the beauties of the book is that all is foreshadowed in the opening chapters. The reader is introduced to the smug husband who expects perfection, the bitter servant who covets Luiza’s lifestyle and the faithful best friend – the truly honourable character in the book.
At the Sunday evening gathering, we also meet a cast of self-obsessives: Dona Felicidade, who yearns for self-important Acacio, not knowing he has his housekeeper as a concubine; Zuzarte the surgeon, who feels he should be making a lot of money; and Ernestinho, the amateur playwright obsessed with Art.
Eca de Queiroz exhorts us to enjoy his characters with the gusto that he creates them and the pinpricks at society’s vanity. The failings of the priesthood – to which he dedicated a whole book, The Crime of Father Amero – barely get a mention here. Yet the reference to the lover of the servant Juliana’s mother – who was seen in a purple surplice in the Procession of the Stations of the Cross – is enough to understand his view of the church.
The translation by Margaret Jull Costa brings the story to life. A book you will surely enjoy.