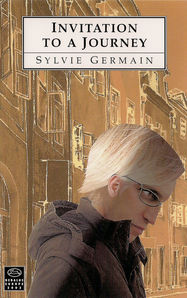 When Ludvik returns to his native Prague after 11 years away, he finds his old teacher and dear friend Brum dying. Readapting to a country that no longer feels like home is made all the more difficult by watching Brum's slow decline. However in the midst of such bleakness, small miracles start occurring, and Ludvik embarks on another journey, this times without ever leaving the confines of his own mind. The beauty and the simplicity of the story is complemented by Germain's rich descriptions;Invitation to a Journey is an intelligent and thought-provoking novel reminiscent of Camus' The Fall.

Esther, the woman who has imperiously dismissed Ludvik from her life, seems at first merely an excuse for him to return to the unnamed eastern European country from which he fled some dozen years before. But as Ludvik travels, on trains from the capital to the small town where his former mentor is dying, or on foot through a now strange city, the grief that her rejection has caused him eats into all his thoughts. His efforts to reconnect with an old life and old place seem unsuccessful; the mind of his old professor wanders, there is sex but no possibility of love, and chance encounters with fellow travellers revolve, maddeningly and inexplicably, around salt. "Man attains knowledge by strange routes," remarks the novel's epigraph, and slowly Ludvik realises his salvation comes in grains. Germain's strange evocation of melancholy is a gentler version of the insanity in Nabokov's Despair , compelling and intriguing.

Germain's eerie evocation of dislocation.... describing the novel is as difficult as trying to describe the flavour of salt.The protagonist Ludvik drifts around, encountering archly symbolic strangers. Each offers mordant statements, with the various connotations of salt as their theme.

Never read a Sylvie Germain? Accept this invitation and you’ll be hooked. Once described as the 'Vincent Van Gogh of our age', she’s also descended from Angela Carter, Michele Roberts and Francoise Sagain, although her latest novel translated from the French by Christine Donougher without losing any of its original texture, demonstrates how she's reached a lofty writing level of her own. In it Germain explores universal themes –rejected love and how destructive affairs of the heart can be – through the story of Ludvik, a man who has 'lived through this century without any realisation of the evil that reigned.' He returns to post-Cold War Eastern Europe like a wounded animal after an affair has gone wrong and goes on trains, trams and treks to discover a humbling truth – that miracles can happen and that it is possible to mend broken hearts. Culminating in an amazingly joyful ending – an affirmation of life as much as a rejection of cynicism – the book takes you on a dark journey then releases you into a brighter world where it is still good to be alive. This triumphant mix of literary panache and human values, brings you face to face with yourself.