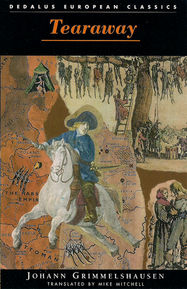 Johann Grimmelshausen was born in early 17th century Germany and fought in the Thirty Years War before becoming a writer, flavouring his memoirs with a sense of the fantastical story and fascinating yarn. Tearaway is the sequel to the German classic Simplicissimus which recounted the life of the author in the war and his many escapades across Europe involving his wife,fellow soldiers and any number of unlikely characters from the west coast of France to the eastern borders of Turkey. Eventually destined to live his remaining days as a one legged fiddler begging, stealing and cheating his way across his homeland he certainly lived a life getting there,however unlikely may be some of the tales he tells.

Tearaway first published in 1670, is the third Johann Grimmelshausen novel to feature Simplicius and tells of the further encounters and exploits of this rather brazen traveller, with the horrors of the Thirty Years War looming in the background. Written in a direct narrative, the prose is just as engaging 333 years on.

Ian Maxen in What's on in London