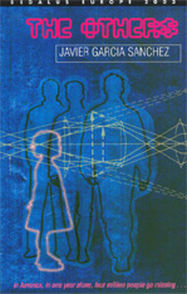 Two unnamed journalists are trying to interview an incarcerated and catatonic ex-policeman: all they know is that he was working on inexplicable disappearances, was obsessed with theories of optics and consciousness, and tried to kill his family. Sanchez's eerie little chiller thrives by making very everyday occurrences (like catching an image in the corner of your eye) the driving force for the subsequent spiral into madness. Although the ending is a tad melodramatic, it more than manages to induce a ripple of goose-flesh.

Stuart Kelly in Scotland on Sunday

The skeleton of Sanchez's novel is an investigation by two journalists. How could a model police inspector, who specialises in the most difficult of missing persons cases, end up in a mental asylum, apparently criminally insane, after a frightening attempt to kill his family? The flesh of the book is the shocking answer provided by the interior monologues of the errant detective himself, referred to his initials only,'RV', held in an isolated institution called the Spa. The books eschews all other names of places and people, which adds to the sense of claustrophobia. This imaginative and admirable is marred by the incoherence and illogicality of the plot when it turns from a powerful study of obsession and madness into a paranoia-fuelled horror fantasy.

Robert Smith in What's on in London

R. V., once a respected police officer dedicated to tracking down missing persons, languishes in catatonia after trying to murder his wife and son. Ensconced for 15 years in a remote mental hospital, he will murmur only the few words 'They are watching us.' After reading the erstwhile detective's obsessive, incomprehensible diary, which consists of sentence fragments about optical illusions and the science of perception, two journalists drive to the hospital to investigate. As they uneasily watch R. V., Garcia Sanchez has the unmoving man's memories replay the events that led him to attempt murder. Did he gradually descend into madness or discover a peripheral reality that terrified him into permanent silence? Layers of atmospheric detail--a dying nun who whispers of the visible and the invisible, a little girl who reports a new friend her mother cannot see, tiny cuts and cracks in windows and mirrors that suggest another world pressing against our own--enable this intriguing book about the psychological nature of fear to achieve its disturbing effect.

Two hacks investigate a lunatic, a man who was formerly a top cop in charge of missing persons. What sent him bonkers is what they want to know.The ramblings of the cop himself give the book a damn spooky feel and it makes for good, powerful horror.It'll leave you wondering if YOU are mad?