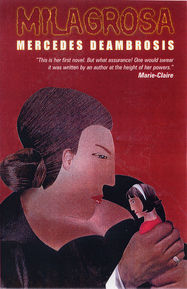 A finely crafted first novel that, in the form of a young woman's childhood recollections of her mother, creates a portrait of the last days of Franco's Spain. Young Maria de los Milagros, known to one and all as Milagrosa, has no one to blame but herself if she's not a child prodigy: after all, her mother Carmen began taking her to school at the age of two. That, admittedly, was more for her mother's benefit than hers-Carmen was the village schoolmistress and saw no reason to waste good money on a babysitter-but it gave Milagrosa something of a head start all the same. A sensitive and sheltered girl, Milagrosa is nevertheless completely overshadowed by her strong and outgoing mother. Used to getting her way, Carmen does not suffer fools gladly: in one of her fits of pique, she even punched out the mayor and was subsequently dismissed from her post. Undeterred, she took a position in her old hometown and moved back with her daughter, sister, and mother (her husband, who refused to move, was unceremoniously left behind). In her new surroundings, during the 1960s, Milagrosa grows up surrounded by all the old certitudes of Spain-making her First Communion; listening to Franco's weekly radio broadcasts-but her coming-of-age is troubled by storm clouds of change looming over Spain and her family alike. Carmen finds herself the victim of a rebellion after her mother dies, when her nephew Arturo stands up to her and demands that his mother receive her fair share (i.e., the greater part) of the estate. That's bad enough, but soon the whole country seems on the verge of turmoil when the elderly Franco falls deathly ill. Can Spain survive without Carmen's beloved caudillo? Can Carmen? The old ways die hard, but hardest of all for the old themselves. An exceptional debut, sensitive and rich without sentimentality.