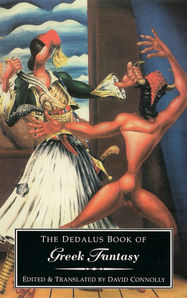 The Dedalus Book of Greek Fantasy

The myth of mediterranean jollity dies hard. It's still often assumed that anyone living in close proximity to the sun will, perforce, be sunny. But if this collection of stories show anything, it is that the modern Greek genius is as dark as anything, that might sprout from Siberia. The Greek spirit, however apparently jaunty, is ultimately introspective. It mistakes the state of the soul for the state of the world.
Connolly's introduction is a treat in itself. It defines fantasy as 'a poetic rationalisation of an irrational world.' The stories presented amply justify this thesis. From the 19th century, Achilleus Paraschos gives us a tale of midwife summoned by a vampire to speed the birth of what had better be his son. When the child dies, so does the midwife. Nanos Valaoritis tells of a man who loses his head - his wife wearily puts it in the fridge to stay fresh - and finds a pretty nurse to soothe him. He vows 'never again to put anything solid in his mouth before first finding his head'. The story ends on this dry, dark note: ' Such things always happen ''against our will''.' The poet Cavafy conjures up a story of a man cheated of a fortune because he did not keep an appointment made in a dream. The last word must go to Papadiamantis, whose tale ends with this unanswerable truth: mystery is seen by 'those as were pure in times gone by and those are fey in our days.'

Dedalus's range of European anthologies is eminently collectable, and offers pleasant appetisers of less well known literary cultures. This Greek anthology is a treat: reworkings of classical myths from Andreas Embiricos, a Kafkaesque waking nightmare in Nanos Valaoritis's story about a man who literally loses his head, and a poignant Borgesian dystopia by Aris Marangopoulos, 'Nostalgic Clone'. Some of the work is fairly pulpy science-fiction, but part of the charm of these collections is the sheer diversity of styles.

One of the many pleasures of this book is happening upon stories by authors who,like Papadiamantis, are not usually associated with fantasy literature. But Connolly is also to be congratulated for bringing before the British reader an anthology, not only of fantasy, but of prose, the 'Cinderella' perhaps of modern Greek literature. Special skills were required by the original author of these texts, who had to make their fantasy convincing. Special too are the skills required for translating them, and we are indebted to Connolly for combining so admirably his knowledge of Greek literature with his way with words in English.

Winner of the Modern Greek Translation Prize for 2004.

Winner of the Hellenic Foundation award this week, David Connolly's unique anthology opens a window on two centuries of prose visions from the greatest of modern Greek authors. A tradition kicked off by the marvels of The Odyssey thrives here in tall tales, ghostly adventures and strange parables, from folklore to SF.
A rich feast of mystery - but always tasty - fictional meze.

In his, Connolly writes about the criteria for the choice of authors, from the birth of the modern Greek State to the present. One priority was to feature writers who work is not normally associated with fantasy fiction, such as the poets C.P. Cavafy, Napoleon Lapathiotis and Tassos Leivaditis. He also wished to provide examples of 'all the sub-genres within fantasy literature, defined in its broadest sense as referring to events which depart from what is possible or plausible in reality'. The Greek Surrealist movement is well represented.

Rights:
Compilation and World English language in this translation.