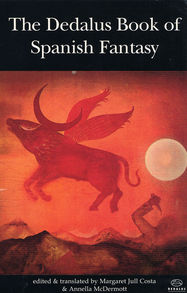 Writers from Spain rather than Spanish-speakers, so no Borges or Garcia Marquez, but their spirit hovers over this fine collection where ghosts, doppelgangers and meta-narratives abound, as well as time travel, aliens in Barcelona, and Cervantes' chickens. Javier Marias and Bernardo Atxaga are the best-known among 30 modern authors, most of whom appear in English for the first time.

The Dedalus Book of Spanish Fantasy has many revelations for English-language readers on the lookout for something at once ancient and brand-new: the darkly baroque, the Goya-grotesque, or a surreal modernity, most of it touched by the forces of death or metamorphosis.

Read this largely unfamiliar selection of tales of the mysterious, the undead and the frankly implausible and Spain will no longer seem a country of such bright sunshine. The editors have combed through a forgotten genre of Spanish literature which borrowed from folk-tales, English Victorian Gothic and the experiments of the Symbolists and Surrealists in the early part of this century to produce narratives which seem to point more to the writing of Latin American than to that of Catalonia, the Basque country or Madrid.

This is an interesting, well-balanced selection of the unfamiliar, especially recommended to admirers of Bradbury, Sturgeon and Poe.

Rights:
Compilation, introduction and World English language in this translation