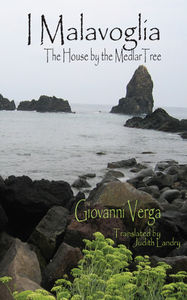 Giovanni Verga's novel of 1881 I Malavoglia presented its translator Judith Landry with formidable problems of dialect and peasant speech which she has solved so unobtrusively that one wonders why this moving and tragic tale is so little known in England.

Margaret Drabble in The Observer's Books of the Year

This is a tragic tale of poverty, honour and survival in a society where the weak go to the wall unmourned.

I Malavoglia obsessed me from the moment I read it.And when the chance came I made a film of it,La Terra Trema.

I will finally read,in its entirety,Giovanni Verga's beautiful novel The House by the Medlar Tree, which I have read in bits over the past weeks.

Written in 1881 and set in the Sicilian village of Aci Trezza in the 1860s, Verga's novel charts the failing fortunes of the Malavoglia, a family of fisherfolk who are living through a period of political change following the country's annexation to Italy. The Malavoglias' inexorable slide is triggered by the decision of Padron 'Ntoni to buy a cargo of lupins on credit after a bad year of business, only to lose the precious cargo in a storm at sea. The repayment of this debt leads to the loss of the family home, and all subsequent efforts to reclaim it are doomed. The old values are dying and it is largely due to young 'Ntoni, exposed to the outside world during naval service and ever more dissatisfied by the life endured by the rest of Aci Trezza's charmingly loquacious inhabitants, that the family fortunes are never restored. A tragic 'account of the sort of disquiet visited upon a family ...by the vague desire for the unknown', their struggle for survival is depicted by Verga with stark honesty.

Anna Scott in The Guardian

Originally published in his native Italy in 1881, Verga's poignant novel depicts the struggles of a Sicilian fishing community during the advent of industrialization. Through a style reminiscent of Steinbeck, the author successfully combines lyrical prose(beautifully translated by Judith Landry)with an inspiring social commentary, highlighting the poverty suffered by provincial Sicilian communities under Garibaldi's rule. Focusing on the theme of human survival, Verga's sensitive use of social Darwinism illustrates the horrendous consequences of a vastly increased rich/poor divide.

English editions of Verga's masterpiece are comparative scarce; that is why this reprint of Judith Landry's now classic translation from 1985 is particularly welcome. Contrary to the works of Verga's contemporary, Luigi Pirandello, who notoriously employed a syntax that sought to facilitate the job of his translators, Verga's prose is embedded in in the oral structure of the Sicilian parlata. Yet Landry succeeds in making the English version not only entirely consistent with the original text but also pleasurable to read, without losing the solemn pace that echoes the rhythms of Greek tragedies.