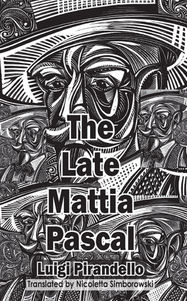 This is Pirandello's third novel, published in 1904, and marks the start of a major theme in his work - the nature of identity.

Pascal, a landowner fallen on hard times and trapped in a miserable marriage, runs away from home and wins a lot of money at the gaming tables in Monte Carlo. Meanwhile a body has been found in the millrace of his village and it is assumed that Pascal has killed himself. Seizing what looks like a chance to create a new life, he travels to Rome under an assumed name and struggles to invent a different identity which he can inhabit. He fails, returns home, finds his wife has remarried and has to act out the role of being as it were a living ghost. All these tragic events are recounted with verve and wit and comes across clearly in Simborowski's spirited translation from the Italian.

Robert Nye in The Guardian

The novel is a tour de force of cynicism about the human condition.