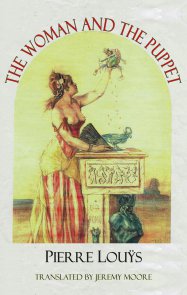 This elegantly simple story has lost none of its charm. It is carnival time in Spain, and a man named Andre falls in love with a woman he glimpses. She seems to reciprocate, but another man, Mateo, appears on the scene to warn Andre about the woman and tell him the story of his own long infatuation with her. And what a story. What an insanely infuriating character she is. Mateo's dreadful narrative takes up most of the book, like an amorous Rime of The Ancient Mariner. Is Andre 'a sadder and wiser man' for hearing it? Certainly not wiser.

Phil Baker in the Sunday Times

Oscar Wilde described the author as 'too beautiful to be a man'; his classic tale of sexual teasing, in which the beautiful Concha offers her lover everything except her virginity, has been filmed several times. Marlene Dietrich took the role in 'The Devil Is A Woman'; Luis Bunuel called his version 'That Obscure Object Of Desire'. Concha says of her prize: 'It's my guitar, and I'll play it for whoever I like'.

'First published in 1898, this French novel receives a new edition from Dedalus, a publisher with a track record of resurrecting lost classics of European fiction. Its author was sadly overshadowed in his own time by his considerably more famous friends - André Gide, Oscar Wilde and Claude Debussy, to name a few. Nevertheless, this slim and seductive study of obsessive love went on to inspire five film adaptations, including Luis Buñuel’s That Obscure Object of Desire (1977). The book certainly retains its dreamlike charm, as it recounts in fragments the tale of a femme fatale - the mysterious and magnetic Concha Pérez - playing off two men against each other. Set during carnival season in Spain, The Woman and The Puppet still simmers with a dark eroticism over a century after its publication.'

A discomfiting mix of Lolitan nymphet and mature seductress, Concha is an exceptionally well-captured and strong character; it's no surprise that the novel has been the basis of numerous films.