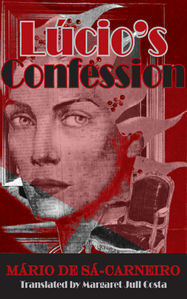 Written in 1913 this is a thoroughly decadent story of an unusual menage a trois which ends in a killing. It's filled with poets and artists and those special problems that sensitive people have ('Do you hear that music? It's like a symbol of my life: a wonderful melody murdered by a terrible unworthy performer.') The last word on this magnificent period piece - bejewelled and opiated and splendidly over the top - belongs to one of its characters: 'It seems more like the vision of some brilliant onanist than reality'.

An enigmatic love triangle riddled with madness and jealousy, set in fin de siecle Paris and Lisbon, and its translation reopens a rich vein of fantasy.

Christopher Fowler in Time Out

Written by one of Portugal’s greatest Modernists, Lucio’s Confession is a short novel that defies a logical explanation of its plot. The narrative purports to a confession in which Lucio, recently released from jail after serving ten years for murder, decides to tell the truth; Lucio maintains that he is innocent and that now he will state the facts of what really happened when his friend, Ricardo, died, even if those facts defy reason. And so begins a mind-bending story about art, literature, love, sexual obsession, deceit, madness and guilt.

Lucio is a struggling artist in Paris in 1895 when he meets the poet Ricardo de Loureiro. Their friendship quickly turns into a secret obsession for the timid Lucio, who admires the lively Ricardo. Trouble steps in when Ricardo, who seemed unable to ever devote himself to a married life, suddenly introduces his wife to Lucio. This changes everything between the two, but Lucio believes things can still be the way they were before.

This all seems very banal until the facts in the novel start contradicting themselves and the protagonist starts running out of explanations for the inconsistencies. Slowly it becomes obvious we’ll never know the whole story, and we’re drawn into a world of fantasy and madness for a fascinating ride through a shattered mind.

This elegant prose nightmare was written in 1914, just two years before the author committed suicide in Paris.

It is, in this sparkling new translation by Margaret Jull Costa, a fabulous testament to fin de siecle Paris - the story of an enigmatic and unusual menage a trois, with a strong homerotic subtext, set in a world of fantasy and madness.