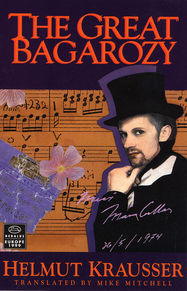 Psychiatrist Cora has a new patient who is obsessed with opera diva Maria Callas. Cora's life is at a crisis point: bored of her tax consultant husband and struggling with professional failure, she finds her new patient fascinating - and also dangerously attractive. She falls in love with him, but he refuses to have an affair. He claims to be the Devil and to have inhabited Callas's black poodle - is he quite simply mad? Then he disappears but Cora rediscovers him performing in variety as The Great Bagarozy. An exhilarating blend of reality and the supernatural, this is one of the most acclaimed German novels of recent years.

The cultures of psychiatry and celebrity worship are memorably skewered in this ingenious fantasy of satanic possession and perhaps delusion, a 1997 novel by a prizewinning and critically acclaimed German writer now making his American debut. A brilliant work. Let's have more of Krausser's fiction, please.

First published in Germany in 1997 and now well translated into English by Mike Mitchell, it is a vivid and mischevious fantasy, fast-paced and often wickedly funny.

Ian Brunskill in The Times