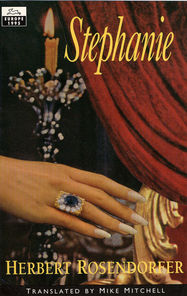 An elegant, elegiac novel, its titular character goes back to a past life in which she is a Spanish duchess who has murdered her husband. The book's first half, narrated by her brother, tells of the start of Stephanie's strange experience and her eventual disappearance from the present, to which she returns only to die of cancer. The second is composed of letters written by Stephanie, in 1761, to her brother. The conceit sounds trite, yet it works well. Characters are evoked economically, and the claustrophobic world to which Stephanie regresses is detailed deftly and dispassionately.

Her story is interwoven most skilfully with her 20th century life, which holds strange parallels and reflections and allows Rosendorfer some acute and occasionally darkly comic, social comment. This is a quality book from a first-rate mind of considerable sophistication. Dedalus is to be thanked for introducing us to Herbert Rosendorfer.