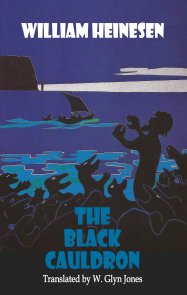 William Heinesen's novels are intensely Faeroese, but so universal in their appeal that the reader automatically surrenders to their charm, their energy, their easy intensity and is overwhelmed by the perspective they convey.

In The Black Cauldron, Heinesen provided an unsparing portrait of speculation, violence and intrigue in the Faeroes under British wartime occupation.

'The Black Cauldron, arguably Heinesen's best book, is rigorously modernistic in approach and style - an intriguing challenging read, with the circling faces of Faroese society set against the British occupation of the Faroes in World War 11. If this whets your appetite, carry on with the same author's The Tower at the Edge of the World.'

...a work of frightfully still-relevant and lurid modernism, ripe for reinterpretation in today’s age of communal outrage and mass political psychosis. Excellent.

William Heinesen (1900-1991), who set his novels in the Faroe Islands off the Danish coast, was one of Scandinavia’s leading twentieth-century writers. The Black Cauldron translated by W. Glyn Jones, first appeared in the original Danish in 1949, and is set in the Second World War when the Faroes were occupied by the British. Questions of life and death, good and evil, religion and sex, are ever in the background.

William Heinesen(1900-91)- in his poetry, short stories and above all, six impressive novels – is his country’s chronicler, diagnostician and celebrant…
Heinesen knew at first hand the vulnerability of his Faroese kin - geographically isolated, unusually dependent on the elements for survival, and even today more churchgoing than other Nordic countries, with a culture of evangelism and charismatic sects, whether Plymouth Brethen or Seventh-day Adventists. Such anti-individualist movements, active from the mid-nineteenth century onwards, frequently showed downright hostility towards private, religious experiences and those guided by their own religious convictions. This hostility which could erupt into vicious and unequal conflict – for sectarianism came well-funded and linked to authority – stalks all of Heinesen’s richly worked fiction. The ugly incidents often pivotal to his narratives, and the tragic, sometimes brutal ends to the ordinary lives depicted, do not break up Heinesen’s surface realism. Rather they enhance it. The struggle between rival interpretations of where goodness and evil reside is an inextricable part of these mundane existences.
But Heinesen’s novels refuse to let individuals, however sympathetic, take over. This is eminently notable in The Black Cauldron, the most moving of them all. The novel is set during the British Occupation of the Faroes during the Second World War, after Germany’s invasion of Denmark on April 9, 1940… The intensity of Heinesen’s gaze, the richness of his language, redeem the harshness of his subject. The humanity can feel as passionately as it does, however wrong-headed the cause, itself commands a kind of awed appreciation.

Paul Binding in the Times LiterarySupplement

So also Heinesen's novel is set on a small, out-of-the-way stage -- but is, fundamentally, near-universal. The dealings and interactions among this large cast of characters are specific to the time and place, but, in their basics, transfer easily almost anywhere: Heinesen's portrait looks very local, but is also comfortably (or uncomfortably) familiar to readers anywhere else.
The mix of humor and darkness, including in a character such as Opperman, or the alarming discovery of a the works of an alarm clock in a drawer ("It was well known that the works of a clock were a classic component of a time bomb. All that was missing was the explosive charge"), is particularly enjoyable. To good effect, Heinesen also doesn't describe the truly darkest occurrences (such as the deaths and rapes) up-close, not so much to gloss over them but because his focus is on after-math and effects.
So spread out, and without a neat story arc, The Black Cauldron is somewhat unwieldy, but it's a solid and sometimes very impressive read.

Michael A. Orthofer in The Complete Review