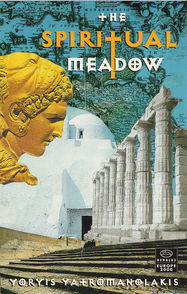 A young man arrives on a Greek island to take up a teaching position, but what follows is a surreal allegory in which the island sinks beneath the sea, he becomes a Byzantine monk, and famous figures from the past shoot it out in the school assembly hall. Written during the Colonel's dictatorship and first published in 1974, this strange novel provides a highly unorthodox lesson in Greek history.

And now for something completely different... from the acclaimed Greek author of the suavely Ovidian Eroticon, this 1974 novel ( his first ) employs the current obscure form of the spiritual biography (roughly akin to the saint's life) to relate the adventures of Theodore P., a teacher of humanities assigned to a remote Greek island. Addressing his tale to the women in his life ( a former and current lover, plus his sister) Theodore tells of being swallowed and regurgitated by a whale, being thrust into reprises of famous battles and acquaintance with eminent military and political figures ( not to mention poets George Seferis and Yanni Ritsos), and residing in a city totally submerged by a catastrophic flood ( though his fellow residents seem unperturbed, and go about their business as usual). A knowledge of Greece's modern and recent history would doubtless enrich the reader's understanding. But the amusing mix of dream vision, condensed history, magical realism, and sociopolitical satire keeps us happily bedazzled, and eagerly reading all the same.