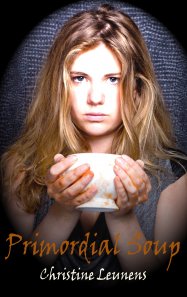 An American girl with an eccentric Lithuanian mother develops strange ideas about food and sex and the connection between the two. When she invites lusty college professors to dinner they don't realise it's their own bits that are on the menu. This debut novel by a former fashion model is very funny and totally weird, not least because of its idiosyncratic and highly inventive use of language.

Kate is the anorexic narrator and second-generation Lithuanian immigrant to Florida whose penchant for vampirism indicate's Leunens delightfully perverse reading of the family dynamic. Kate's mother is coarse and insensitive, leaving her daughter to wallow in dangerous fantasies. When her mother sees Kate fighting with her own sister, she laments ' You're own flesh an 'blood!', conjuring the image in Kate's head of her sister as 'red meat'. If you combine this with the sores on Christ's body, it isn't surprising that these 'intensive doses of theology and genealogy did not assist my cold-blooded eating of flesh'. There is nothing cold-blooded in Kate's sexual experiments, which combine flesh and hunger.

Lilian Pizzichini in The Independent on Sunday

Novels about young girls and food problems don't usually make for light reading and frequently border on the depressing. This one, thankfully, has barely a serious note in it. Mealtimes at Kate Lester's house are not an enjoyable experience. The culinary creations of her Lithuanian mother range from the undesirable to the disgusting. Food begins to taint Kate's vision of the world and culinary imagery constantly fills her mind. Things are further confused, when, interpreting what she hears at church literally, she comes to the belief that sex involves man and woman "eating each other's flesh". With a mother unwilling to go into the facts of life, Kate's first sexual encounter is certain to be interesting. This wickedly funny novel hurtles along at a furious pace. Leunens captures the confusions and horrors of adolescence brilliantly, and her use of metaphor is masterful.

Elizabeth Judge in the Times

Sexuality and revelation are also on the agenda in Christine Leunens's remarkable debut novel, Primordial Soup, a black comedy about the fleshy nature of life. Exploring Kate's fast-and-gorge existence and her ambivalence towards men, it is a memorable book that manages to be a page turner and a stomach turner in equal measure.

Former fashion model Christine Leunens serves up a messy bowl of sex, food and faith in Primordial Soup. Kate Lester lives in Florida with her sister and their batty Lithuanian mother, Olga, who feed them offenses like rabbit with prunes (on Easter, no less ) and will not tell them the facts of life. To say that Kate winds up with issues would be an understatement, from her first orgasm (which happens during communion) to her first sexual encounter, she views her body with shame, revulsion and ignorance, imagining herself and everybody around her as meat. Kinky, grotesque and very funny, this is not for the faint of heart.

Deceptively breezy and light, but descending into a special kind of darkness, this novel is narrated by Kate Lester, a meat-hater (due to the bizarre views of her mother) who turns to sex in adolescence as a way of achieving a kind of normalcy. Unfortunately, in college, she begins to mix sex with a sudden hunger for meat: 'I spent those afternoons marinating Professor Ranji in my mind, in lassi and rose petals.' Satirical, unflinching, an antidote to the more cloying choices from the Oprah Book Club."

'Different from any other story. Highly original.'

"Crazy. Wild, sensual. A small masterpiece which demonstrates know-how (savoir-faire) and daring to do it (ozer-faire)."

'It's literary and I can’t think of anything like it already done before. Brilliant, new. One can read it in peace even though it troubles the mind."'

'I fell in love with this novel at first bite.'

"The surrealistic atmosphere of this novel brings to mind the film Delicatessen. A magnificent novel."