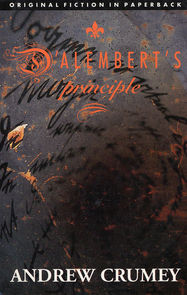 A wonderfully diverting and stimulating entertainment. Cunningly structured and as satisfying as an intricate piece of clockwork, it plays with narrative, revels in ideas and succeeds in being both fey and sharp, detached and compassionate. At a time when fiction gives all to the tired virtual realities of sex and violence, internets, Agas and middle-class Angst, it is a brilliant reminder of the power of the imagination to surprise, delight and open windows.

Crumey does produce excellent post-modernist novels, each as concentric and cunning as the others. This is a triptych starting with D'Alembert penning his imagined memoirs. The literary equivalent of an Escher, the story has no identifiable end or beginning. Clever, entertaining, engaging

Lucy Atkins in The Guardian

Swift who relished every storyteller's ruse and mocked the pomp of scholarship would have enjoyed the Scottish writer Andrew Crumey.

D'Alembert's Principle is certainly another beautifully composed work which
lets you glide through the story but afterwards leaves you asking
questions,looking for connections and puzzling, quite happily, for hours.

Rosemary Goring in Scotland on Sunday

This is a highly polished fable, which sustains its learning with wit and
zestful confidence.

It is a prolonged attack on reductive thought, on any one way of seeing the world. Like quantum physics, the novel wants to offer the reader possibilities. It is very post-modern. The book also sets the the taste by which it should be judged. Like Crumey's giant astronomical clock, marking time of the universe, his ambitious novel works. It doesn't stop ticking.

Alice Thompson in The Scotsman

Crumey is one of my three or four favourite modern writers - a wise, funny, alert and original novelist who has never disappointed.