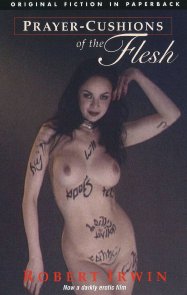 Alev Adil in The Times Literary

Brian Case in Time Out

Harems have long been a staple setting for erotic fiction, but they have never created an ambience quite like that in Prayer-Cushions of the Flesh. Reprinted to tie in with a film adaptation of this darkly humorous story, the novel tells of Orkhan, who is released from the cage he had been kept in for the last 15 years and made Sultan. Immediately, he looks forward to endless pleasure in the harem, but the concubines who live there have many wiles, and he is soon plunged into a bizarre world of fortune-tellers, dwarves, eunuchs, homosexual giraffes and cake, where the women are usually one step ahead of him.
Robert Irwin uses the languid and sensual background of the harem to play out a deadly game of deception and temptation and make the point that love and lust should never be confused. Prayer-Cushions of the Flesh has been hailed as one of the finest erotic novels of recent years, and while it is elegantly written, you'll either love or hate the book's whole concept. And perhaps one day someone will explain why a dash of bestiality is seemingly compulsory in any book which wishes to be seen as literary filth, rather than just filth.

Robert Irwin's erotic novella effortlessly conjures up the heady world of the Arabian Nights. The labyrinthine palace is a magic box full of wonders in which nothing and no one are quite as they seem. Irwin's tone is playful and knowing, clearly enjoying giving a 21st century twist to a time-honoured tradition of storytelling. There's an air of eastern philosophy too - Orkhan goes out into the world and tastes the many earthy pleasures, but learns that they are illusory - making this a sort of sexy Siddharta. The author's vivid imagination, jocular tone and evident knowledge of all things Arabic, lends Prayer-Cushions an air of sophisticated, cerebral decadence. An after-dinner treat for the broadminded.

This slim volume is a little gem, a minor masterpiece.It has one fault, it is far too short! I wanted so much more, I was sad when I finished it. Robert Irwin writes with wit, intelligence, pace and humour.He has created a delicious blend of Gulliver,Macchiavelli, Candide, The Female Eunuch, a bestiary and encyclopaedic sex in a picaresque novel that has as many layers as an onion, and can be appreciated at multiple levels. It will bear re-reading.Fact blends with fantasy, bondage with bestiality, waterworks with whipping. Voluntary castration and sex with crocodiles are a novelty, but Mr Irwin encompasses the widest range of passions and positions. Prayer-Cushions of the Flesh is amusing and instructive, informed and informative. Voltaire would relish the ending. It should grace every library, every bedside table.In a more enlightened society it would be a set text.

“ Irwin's prose is exotic and the book is sexy... In intelligence and detail Irwin's tale brings to mind A.S.Byatt' recent fable' The Djin in the Nightingale's Eye': it's what Byatt might have written after browsing Penthouse.”

Sylvia Brownrigg in The Guardian