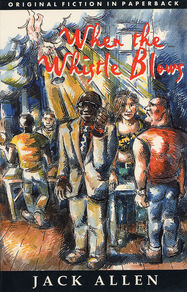 When the Whistle Blows

Caleb Duck, a burnt-out inner city comprehensive teacher of "integrated studies", marks off the days by sticking bogeys to the classroom radiator. At war against the national curriculum and his officious Head, Duck watches as the school descends into an anarchy of sex, drugs and cannibalism. Allen's bitter black comedy will strike a chord with disaffected pedagogues everywhere.

He is often crisply funny in the style of Tom Sharpe and has created a smattering of excellent characters such as Errol. The missives, forms and questionnaires which appear throughout the book add a touch of authenticity, and there are some majestic scenes such as the one in which the inspectors arrive to find " garlands of flowers placed around their necks by scantily dressed maidens." Although the tone is surreal, it is clear that events in the book are rooted in real crises in school.... If you need an uplifting read to relieve the pressure of the job, then this tale should come with a health warning. If, however, you're in the mood for a journey inside the warped mind of a burnt-out teacher-soldier, and enjoy acerbic humour and caustic observation, then this comes highly recommended.

Dark and very funny tale of an inner-city Bristol teacher whose care of 80 problem pupils ends in spectatular disaster.

Unlike most school novels, Allen's subversive black comedy does not have a soft centre. All teachers and politicians should read it because it is on a big subject.How do you educate the children who do not want to come to school and whom schools don't want? It will bring comic relief and a shared sense of understanding to those who have experienced the joys and horrors of teaching.Highly recommended.

Paddy Benefield in The Teacher

Weird, warped. Hopefully there won't be too many teachers who recognise themselves in Caleb Duck, Allen's larger than life protagonist.

For anyone with a sense of humour who's ever been a pupil, a teacher, or a parent, highly recommended.

A black anarchic and larger than life comic tale.

For the reader who laughed at Portnoy's complaint and still liked Humbert when they reached the end of Lolita.

Fictional teachers tend to be on the saintly side.So it's refreshing to get one who doesn't give a toss.

Set in inner-city Bristol, this black comedy is an anarchic, scathing indictment of the educational establishment and national curriculum in England. Imagine a humorous Clockwork Orange set in the classroom, and you'll have a good idea of the havoc wreaked in this comic and disturbing novel. Caleb Duck is head of the Integrated Studies Department, which is full of students who are thieves, arsonists, prostitutes and rapists. Caleb, the bizarre antihero, conducts a surreal uprising with his Camp Escape Committee, fueled on drugs supplied by his 15-year-old second-in-command, Errol, a huge, princely looking Afro-Caribbean lad with underworld ties. Caleb's devious and entire loony plan is to put his students' criminal talent to good use, and he forges a regime that is part Lord of the Flies, part Caligula's Rome, centered around the excavation of a tunnel under the school's sports field. Sprinkled throughout the book are bureaucratic memos, forms, questionnaires and paperwork, functioning as the deadpan backdrop for the novel's violent scenes and grotesque dialogue. American readers may have some trouble comprehending Allen's Briticisms (not to mention following the hallucinogenic narrative), and the language and scenes(pornography, orgies, overdoses and bloody beatings) are harrowing and extreme, but the message about the quality and state of education is real and legitimate.