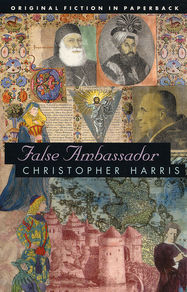 Beginning in 1428, this swashbuckling romp recreates a brutal medieval world on the cusp of civilisation. Despite his scholarly inclination, 15-year-old Thomas Deerham is sent by his father to be a soldier with the English Army. Our hero's adventures take us from savage encounters in France to Rome via Constantinople, with much murder, rape and pillaging along the way.

Set in Renaissance Europe, this entertaining novel tells the story of Thomas, a young soldier in the English army. After deciding to desert, he falls in with a gang of ruthless mercenaries, endures hideous privations, is enslaved and escapes the fall of Constantinople before ending up in Rome.

Angus Clarke in The Times

Another fine historical tale from the author of Theodore . This time he takes us on a journey through the bloody savagery and the no-less-bloody nobility of fifteenth century Europe in a welter of mishap, mayhem and debauchery. An absorbing read that delights and disturbs in equal measure.