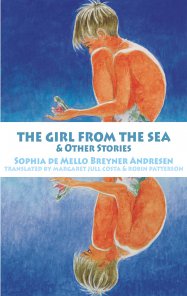 Once upon a time there was a white house in the dunes, facing the sea. It had a door, seven windows and a wooden balcony painted green. Around the house there was a sand garden in which white lilies grew and another plant with white, yellow and red flowers.
In that house lived a boy who spent his days playing on the beach.
It was a very big beach, almost deserted, and there were some marvellous rocks there too. At high tide, though, the rocks were covered in water, and all you could see were the waves growing and growing in the distance until they broke on the sand with a sound like people clapping. At low tide, the rocks were covered in seaweed, whelks, anemones, limpets, algae and urchins. There were pools of water, streams, paths, grottoes, arches, waterfalls. There were stones of all shapes and colours, tiny and smooth and polished by the waves. The sea water was transparent and cold. Sometimes a fish swam by, but almost too quickly to be seen. The boy would say to himself: ‘Look, a fish’ but already it was gone. The jellyfish, though, drifted majestically past, opening and closing their red mantles. And the crabs raced all over the place, with furious faces and the air of creatures in a tremendous hurry.
The boy from the white house loved the rocks. He loved the green of the seaweed, the salt smell of the sea, the transparently cool waters. And that’s why he was really sad that he wasn’t a fish able to swim down to the bottom of the sea without drowning. And he envied the seaweed bobbing on the currents, so light and so happy.
In September came the equinox, bringing with it rough seas, gales, mists, rain and storms. The high tides swept up the beach as far as the dunes. One night, the waves roared and raged so loudly, and beat and broke so hard on the beach, that, in his whitewashed room in the white house, the boy lay awake until the small hours. The shutters on the windows rattled. The wooden floorboards creaked like ship’s masts. It felt as if the waves were surrounding the house, and the sea was about to devour the World. And the boy thought that, outside, in the dark night, a terrible battle was being waged, in which sea and sky and wind were brawling with each other. Finally, weary of listening, he fell asleep, lulled by the storm.
When he woke the next day, everything was calm again. The battle was over. The wind didn’t moan, the sea didn’t roar, there was only the gentle murmuring of small waves. The boy jumped out of bed, went over to the window and saw a lovely morning of bright sunshine, blue sky and blue sea. It was low tide. He put on his bathing trunks and ran down to the beach. Everything was so clear and quiet that he thought last night’s storm must have been a dream.
But it wasn’t. The beach was covered with foam from the stormy waves, rows and rows of foam that trembled in the slightest breeze. It formed shapes like fantastic castles, white, but filled with a thousand other glinting colours. When the boy touched them with his hand, the tremulous castles crumbled.
Then he went to play among the rocks. He began by following a thread of very clear water between two large dark rocks covered in whelks. The stream flowed into a large pool of water where the boy bathed and swam for a long time. Afterwards, he went clambering on over the rocks. He was heading towards the south side of the beach, which was always deserted. The tide was very low, and it was a beautiful morning. The seaweed seemed greener than ever and the sea itself was tinged with lilac. The boy felt so happy that he sometimes broke into a dance. Now and then, he would find a really good pool and plunge in. When he’d already done this about ten times, he realised that it must be time for him to go home. He climbed out of the pool and lay down on a rock in the sun.
‘I really must go home,’ he was thinking, but he didn’t want to leave. And while he was lying there, his face resting on the seaweed, something extraordinary happened: he heard a very strange laugh, rather like the laugh you might hear from a bass baritone in an opera; then he heard a second even stranger laugh, a tiny, brief laugh, more like a cough; this was followed by a third laugh, which sounded like someone in the water going ‘glu glu glu’. The most extraordinary of all, though, was the fourth laugh, which was like a human laugh, only quieter, finer, clearer. He’d never heard such a clear voice: it was as if water or glass were laughing.