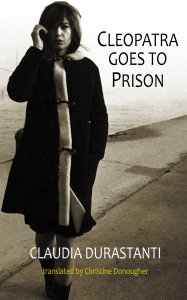 When she gets her identity card back at the security checkout Caterina remembers the time a prison association organised an open day for families and she brought Aurelio’s nephew to the playground.
While the child was being pushed on the swing by his uncle, she stood chatting with one of his cellmates. They talked about the star-shaped tattoos behind his ear and in the crook of his arm; until then she had only ever seen ones like that on girls.
“It was an attempt that didn’t work out. I want to get a constellation done, but I don’t know whether I’ve got enough skin left,” said the inmate. Caterina thought she was being nice to him but when they were saying goodbye he burst out, “You’re getting out, anyway,” in an abrupt, wounded tone, and she was ashamed at having thought, “I deserve it.”
On the way back she glimpses the mauvish mountain peaks; they are ethereal and distant like figures behind a smokescreen.
Caterina stops off in the parking lot behind an electrical appliances shop, running her fingers through her hair, which is wet from the slight drizzle, and a man inside an unmarked police car hoots his horn. He always picks her up after her prison visits because they don’t have much time to see each other and using public transport would make the situation even worse.
When she gets in the car the policeman kisses her, ruffling her hair which she has just tidied, and asks her how Aurelio is.
“Same as ever. He seems less depressed, talks rubbish about the future,” she replies, pulling out the newspaper cutting to check whether the watch she wants to buy Aurelio’s brother is the same as the one on his wrist.
The policeman starts the engine and she asks if his shift the night before was long and dangerous.
“Not especially, we took a schizophrenic woman to the Pertini hospital after complaints from neighbours who heard her quarrelling with her mother for stealing her medication. She collapsed in the car, but at A & E they prioritised a woman who had drunk a glass of orange squash and I had to argue with the nurses to get her admitted.”
“Orange squash sends you to A & E?”
“Her son had dissolved his methadone in it because he didn’t like the taste of the methadone on its own.”
“Is she still alive?”
“She is, the schizophrenic isn’t: insulin shock.”
Caterina nods with a bitter taste in her mouth.
“You’re quiet today,” says the policeman, checking on his hair in the rearview mirror.
“It’s Aurelio. I don’t know what to do about him.” Caterina squints against the light reflecting off the dashboard, her new contact lenses dehydrate her eyes.
“You don’t have to do anything,” he says, stroking her bare leg - she always wears a short skirt when she goes to the prison even if Aurelio can’t see anything from where he is seated.
“He keeps wondering who it was, he doesn’t understand it was a random inspection you carried out.”
“If you attract a certain type of clientele, people talk. Try and tell him that next time.” The policeman parks close to a cast-iron cannon dedicated to the war dead - this is the first time he has brought her to his place.
He does not like living in this area but his salary does not yet allow him to move to a residential neighbourhood; his grandfather left him the apartment and he has done no more than repaint it.
Thanks to his working hours, he does not have to spend too much time among these low square-roofed houses, where the plastic awnings the neighbours have put over their front doors look like faded strips of red liquorice, and Sunday morning lie-ins are disturbed by the rumble of the carwash in his apartment building.
“I’ve never told you anything, I’ve never helped anyone with their inquiries,” says Caterina, walking beside him.
Before crossing the road she points to a supermarket covered with stickers and Chinese characters. “Aurelio and Mario had a video rental store right there.”
“That’s funny, last month we found a girl walled up alive on the floor above. Dodgy massages, money laundering, I’m not allowed to talk about it.”
Caterina turns to see if he is joking, but the policeman is staring at the pavement.
“However, you did tell me something about the nightclub world. Your boyfriend is surrounded by talkers,” he says, taking her by the arm - he is not as yet capable of holding her hand when they are out for a walk. At the crossing, she stops at the traffic lights, the smell of petrol fumes makes her gorge rise.
“That’s not true, don’t say it even as a joke. I can’t bear it, I’ve never told you anything.”
“What flavour ice cream do you want?” asks the policeman as they cross, and Caterina replies that on Thursdays she is never hungry.

In the late afternoon they make love in the bath; the policeman sucks her steam-softened wrists and Caterina’s blood runs hot and frantic like the ink spilled from smashed Bic biros. “I can’t believe you’ve never done it before. You’re thirty,” he says to her, before lying her on her stomach. When he lifts her pelvis Caterina smiles and replies, “I’m a dancer not an animal.”
Later, as they drink water in the living room under the ceiling spotlights, she gets the ammoniac aftertaste of betrayal - which is what prevents her from sleeping and makes her eyes red and watery, like a rabbit’s