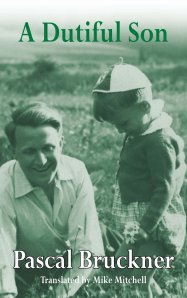 It’s bedtime. Kneeling at the foot of my bed, head bowed, hands together, I murmur my prayer in a low voice. I’m ten. After a brief review of the day’s sins, I make a request of God, our all-powerful Creator. He knows how regularly I attend mass, how fervently I receive communion, how I love Him above all else. I simply ask Him, implore Him, to bring about the death of my father, while driving if possible. Brakes failing while he’s going downhill, black ice, a plane tree, whatever suits Him best.
‘I leave the choice of accident to you, God, see to it that my father kills himself.’
My mother arrives to tuck me in and read me a story. She looks at me tenderly. I intensify my fervour, put on an air of devotion. I close my eyes and say under my breath, ‘I’m leaving you now, God, Maman’s just come into my bedroom.’
She’s proud of my ardent faith and at the same time worried that one day I might be tempted to become a priest. I get up at six in the morning to go and serve at mass in the Jesuit Collège Saint-Joseph, the junior secondary school I attend in Lyons, and I’ve already brought up the possibility of going to the Petit Séminaire for my baccalauréat years. It’s a low mass, a short one, that is, I’m not qualified for the long ceremonies requiring a complex liturgy. When I get lost, I cross myself, it gives me composure. At that early hour there aren’t many people in the church, not much more than a sparse scattering of devout old women straight out of bed muttering their prayers. I’m God’s little eager beaver: the smell of the incense intoxicates me just as the priest intoxicates himself, filling his cruets with cheap white plonk and knocking back a full one himself as early as seven in the morning. His glazed expression makes us giggle. Lighting the candles sends me into raptures, I love this moment of contemplation before lessons. I receive communion, I adore the taste of the host, that unleavened bread that melts on your tongue like a biscuit. It fills me with strength, I mumble my Latin responses without understanding them, which makes them all the more beautiful. I serve at mass with sycophantic ardour – I want to have the best marks in paradise. When I screw up my eyes, it seems to me that Jesus is sending an affectionate wink in my direction.
Two years later, on the occasion of my solemn communion, I indulge in an orgy of goodness. I smile at everyone, the Angel of Good himself is living inside me. With sensual pleasure I sniff my new gilt-edged missal, the pages of which rustle when you turn them. I’m floating above the ground in my alb, I’m bathing in unction. Uncles and aunts cover me in kisses that I in turn freely lavish on my cousins. My zeal fills my mother with pride and a secret concern. It is good to have faith but within limits: the town of Lyons, former centre of the silk industry, is full of wretched abbés in stained cassocks and worn-out boots, the whipping boys of their hierarchy, the laughing stock of the street urchins, the proletarians of the Roman Catholic Apostolic Church. Many of them die young, abused and exhausted.
‘Hurry up and get into bed, it’s late already.’
‘Yes, Maman, right away. Just one more minute, I haven’t finished yet.’
I quickly go over the sins I’ve committed that day, adding two or three just as later on I will add a few items of income to my tax return in case I’ve omitted something more important. I thank the Lord for all His goodness towards me.
‘Please, God, get rid of him, I’ll be very good.’
My mother has no inkling of what’s troubling her little cherub, all she sees in me is innocence and sweetness. The reason for my request to the Almighty goes back several weeks.

I have some geometry homework that I decide to finish after dinner. I skip it and go to bed, maths not being one of my strong points. My father comes to enlighten me and when I stubbornly persist in not understanding anything, he gets impatient. The more he tries to explain things to me, the less I understand. I’m tired. His advice is followed by shouts, his shouts by howls of rage accompanied by smacks. I’m an imbecile, a disgrace to the family. He’s huge, so very imposing. A few minutes later I’m on the floor, I curl up in a ball to escape his blows, I slip under the bed from which his powerful hand drags me out in order to instil the rudiments of arithmetic in me. But above all, and this is what I cannot forgive myself, I beg him to spare me. ‘Have mercy, Papa, have mercy, I’ll work very hard. Please stop.’
The clouts, the kicks don’t really matter. They hurt but the pain goes away. But to humiliate yourself before your torturer, to beg him to spare you because you’ve seen a murderous gleam in his eye, that’s inexcusable.
Later on, when watching detective films, I will always deplore the tendency of the victims to beg their killers’ mercy. It arouses their sadism instead of making them relent. If one has to die, it should be with dignity. My mother comes upstairs, separates us, gives me a long hug while I’m still sobbing, my cheeks bright red. Afterwards my father comes to give me a kiss.
‘Right then, let’s make peace. We’ll finish everything off tomorrow morning.’
I mumble a faint ‘yes’ but resentment has taken hold of me. It’s a pool of pus that gradually seeps into every one of my thoughts. War has been declared: there will be armistices, often happy ones, intervals of harmony, but something has started that will never stop. Even when we’re playing in the evening, under the sheets, at being in a sleigh on an icefield surrounded by wolves, I don’t go along with it any more. Now it’s him who’s the carnivore about to devour me. The blind trust I used to have in him has been broken.

God doesn’t answer my prayers and four years later I stop believing in Him. Until then every evening, or almost, I hear the metal gate open and see the lights of his car on the drive. I go upstairs to shut myself in my room, disappointed and tense. My mother tidies her hair and goes out onto the doorstep to brave the storm. During the night I dream that my body has left my bed and is floating through the air. I’m stuck to the ceiling, as if I were paragliding. I want to stay hanging in the stratosphere, to see the world from above without having to share in its trials and tribulations.
Brutal fathers have one advantage: they don’t lull you with their gentleness, their sentimentality, they don’t try to play at being big brothers or mates. They wake you up like an electric shock, make you someone who’s eternally fighting or eternally oppressed. What mine passed on to me was his fury and for that I’m grateful. The hatred he instilled in me also saved me. I sent it back at him like a boomerang.