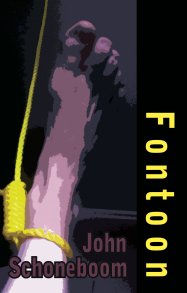 Chapter Hang
I am not, nor will I ever be, a morning person, mused Admiral Fontoon, subliminally noting that it was perhaps the only thing of which he felt truly certain. He winced and made a sucking sound through his clenched teeth as he gingerly touched the bump that had risen on his head.
He was hanging upside down, swaying gently now after swinging wildly for some time. His arms hung limply in mute surrender. One leg extended to the side and bent like a branch that did not know where to grow, drifting half-heartedly, searching to no avail for a plausible position in which to await death or redemption. The one straight and rigid limb was his other leg, which had a tightened noose around the ankle. From there the rope looped through a pulley attached to the ceiling, and routed thence to a spinning spool at the foot of his bed, anchored firmly to the floor with steel bolts. It was the furious spinning of the spool that had yanked the rope so suddenly, resulting in the tightening of the ankle noose and the unceremonious hoisting of Admiral Fontoon. The entire apparatus had been triggered electronically by Fontoon’s alarm clock; more specifically, it had been triggered by the seventh sounding of the snooze alarm, a result, in turn, of Fontoon’s obstinacy, and of his lethargy.
Son of a bitch, thought Fontoon, dangling. He was supposed to have gotten out of bed before all this. That was the whole idea: A clock to inspire fear, ergo motion. Fontoon spoke several profanities aloud to his uncaring apartment, and punched the air viciously, which caused him to spin.
He felt the lurch of nausea and struggled to control it. He did not think he could bear either the sound or the sight of his vomit hurtling out of his mouth and splashing onto various of his possessions some nine feet below, and he especially did not relish the thought of cleaning it all up. Agh, or the taste of it, he thought, which only made it harder to control.
Admiral Fontoon looked around the room while the spinning gradually subsided, trying to get a fix on something for as long as he could, to combat the dizziness. Directly below him was an imitation Oriental rug that had caused bitterness at how quickly it had begun to look dingy. Must everything be cheap? Must everything be tawdry?
Partly on the rug was a terrible pile of newspapers, three months’ worth, which he had been meaning to recycle. He felt a sense of futility, and disgust as well, disgust with the disorderliness that made his whole life seem contemptible.
He tucked his chin to his chest and looked at his captured foot. It was beginning to go numb. His sense of futility spread a little more, starting from just below his sternum and claiming territory in all directions outward, filling his chest, spreading towards his nether region.
Once he felt the first tiny taste creep through, it was all over. He immediately disgorged the contents of his stomach, here we go, this again, the picturing yourself as others would see you, the whole awful pitiless spectacle. In the anticlimactic silence that followed, Fontoon swayed gently from his rope, wiping his mouth with the back of his hand, and determined to get himself down.
He tried to reach up to grab his foot, thinking that he might free it manually. But then what? It was a moot point; he could not reach it; his stomach muscles weren’t strong enough. He looked at his flabby belly, which hung now unnaturally in the direction of his head, quivering just ever so. Sucking in his stomach, he peered at it until he could almost see the vague indentations that would have been where muscle definition would go. Thus satisfied that his physical condition was not so terrible, certainly not beyond reclamation, Fontoon felt a moment of contentment before a surge of real concern at his plight took his mind.
He had felt inconvenienced, to be sure, but had subconsciously assumed that there would of course be a way for him to get down. Now he was beginning to question that assumption. How would he get down? What if he couldn’t? It was a horrible and absurd possibility, but surely history was nothing if not a relentless continuum of the horrible and the absurd. People died in all manner of ridiculous ways. What if this was his destiny? No way to get down.
How would it happen? What exactly would get him? A slow death from starvation, followed by decay until his skeletal foot finally slipped through the noose and sent his bones clattering into an untidy pile on top of dried vomit? Or would the pressure from the blood pouring into his head get him first, causing his brain to haemorrhage, or his neck arteries to burst? Perhaps a heart attack, for some reason, or a stroke. How terrible it was to be lonely. How strangely satisfying to oscillate idly and indulge in self-pity.
His own mother, eventually faced with her dismal, piteous, pile-of-bones son, would only tell the story as the tale of a lamentable imbecile. And jesus god, he thought, she’d be right.
The first job, certainly, was to quell the rising panic that threatened to nauseate him once again. He dedicated his powers of concentration to this task until he heard the first creaking sound from the ceiling. He looked up and saw that the plaster around the screws that held the pulley was bulging and cracking. Oh god. He looked down at the rancid puddle of vomit far below him. No!
Admiral Fontoon shut his eyes as the creaking grew more urgent and the first bits of plaster powder began gently to rain.
And then, with a disappointingly weak crumbling sound, in a hail of plaster and rope, he plummeted earthward.